Community donors, dedicated students, and a Learn by Doing ethos built a new outdoor workspace for the College of Architecture and Environmental Design’s Support Lab—and built it to last. The hundreds of students working in the lab on a daily basis now get to experience the outcome of a “long awaited project,” according to the CAED Construction Management Department Head, Jeong Woo. Outdoor planning, form work, and testing will now flow outside seamlessly from the indoor workspace.

The previous surface consisted of uneven gravel, raising safety concerns and making equipment transport difficult. Now, the area is a professional grade workspace. Professor Woo was the initiator of the project, contacting CalPortland, a Santa Maria based contractor, with a request for sponsorship and assistance. They agreed, knowing that Cal Poly students would be heading the project, embodying Learn by Doing.

Those students were Nathan Horst and Steven Zheng, seniors who made the project their own. The two took on the roles of project managers, overseeing the daily processes end-to-end. With pride, Professor Woo acknowledged that “they basically managed the entire lifecycle of the project.” This included every phase of a realistic design-build, where a construction group both plans and builds the project.

Horst and Zheng communicated smoothly with Cal Poly’s University Facilities Department, contractors and donors from the community. This included working with the Wallace Group and Earth Systems, which donated engineering services, CalPortland Construction, which donated materials and a construction team, and United Rentals, which donated equipment. They also led a team of volunteer students from the American General Contractors Club, and liaised with CAED administrators.

The new concrete slab all but eliminates a major pain point of the previous version—flooding. With a consistent incline leading to a large storm drain, the winter months will now have less effect on outdoor work. Additionally, the accessibility of the space has been dramatically improved, especially for those with disabilities.

Looking back on the experience, Horst is proud of what his and Zheng’s team accomplished in service of others. “It’s just a safer space now for everyone,” he says. More personally, he feels “super grateful to have been given this opportunity. It was powerful to see how everything eventually came together—and how the end result was just how we imagined it.”

The Learn by Doing senior project experience will serve Horst and Zheng well in their careers. It will also make a lasting impact on the next generations of students, who in turn will use the space to work on their own projects, a unique win-win-win opportunity.

Now Professor Woo and Shops Director David Kempken are already looking for more projects that fit this criteria. The heavily used concrete yard seems to be next on the agenda. Located below the Support Lab, the space sees traffic from all five departments within CAED, primarily for the assembly and testing of projects. No significant upgrades or expansions have been made for 30 years.

“That area is really outdated,” said Professor Woo. “And it’s a space that’s used by nearly 600 Construction Management students and 300 Architectural Engineering students.” Overall, he notes that any future projects are likely to offer similar opportunities for students within the College of Architecture and Environmental Design to lead, build, and collaborate. 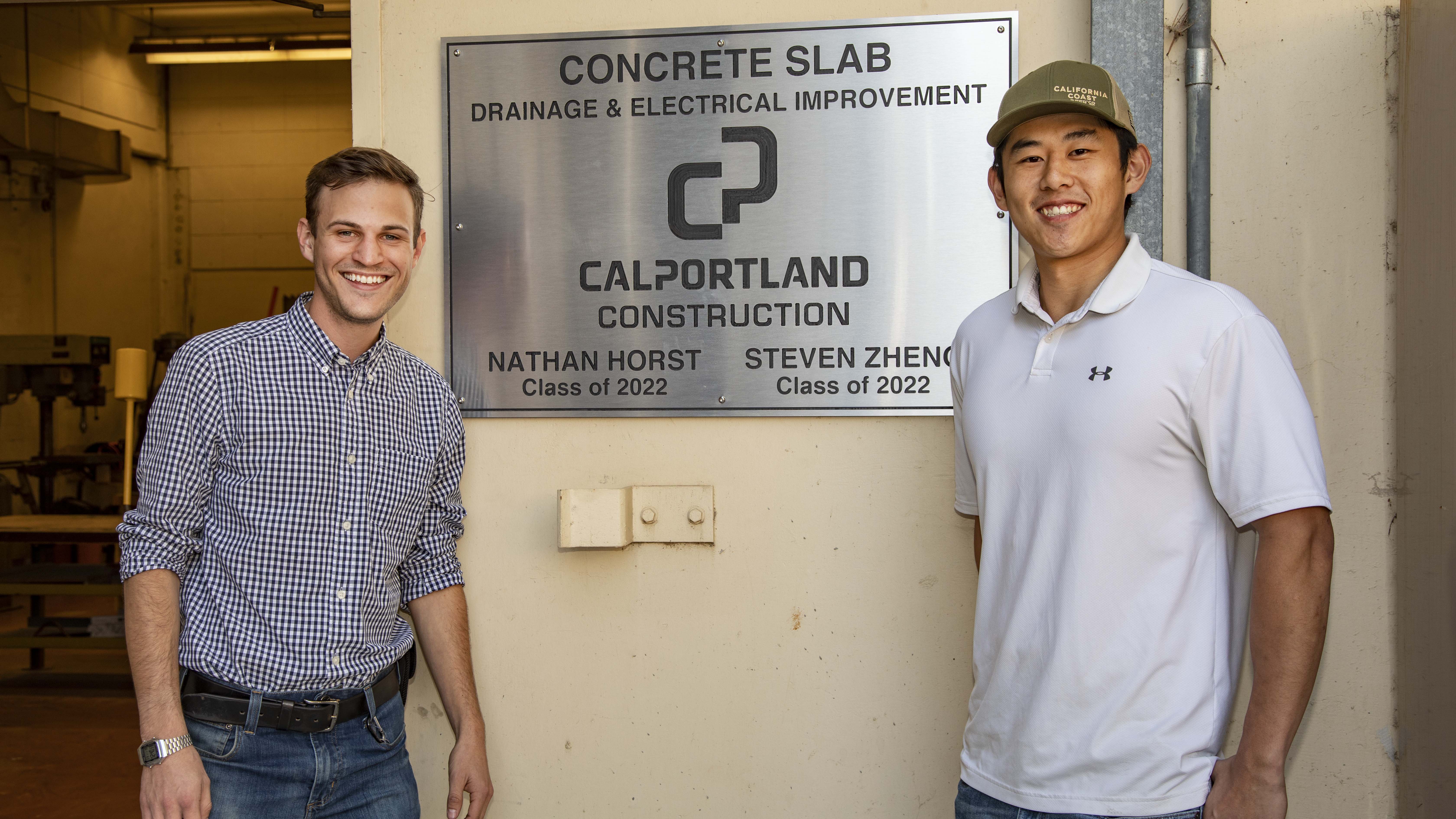 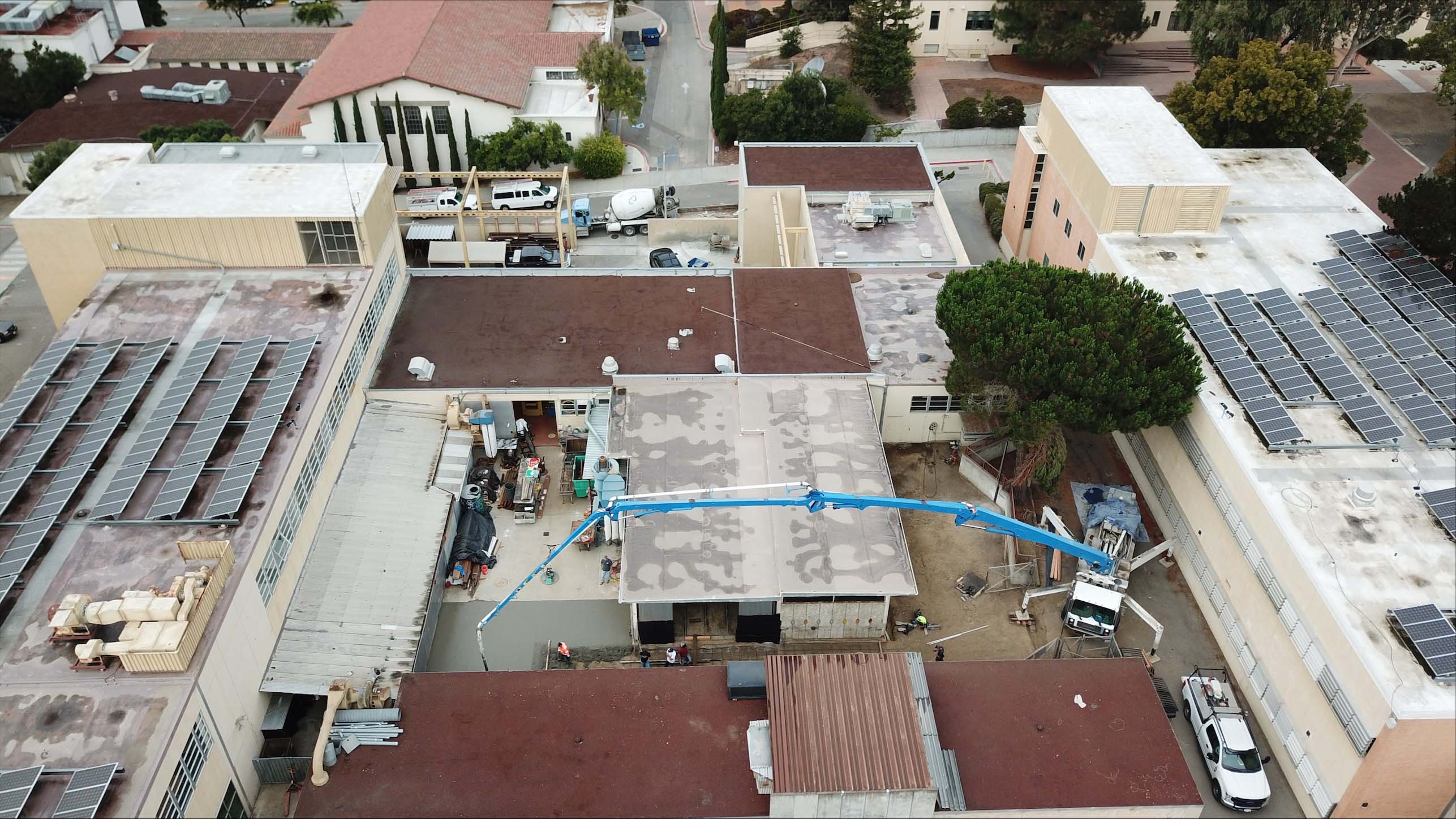 Cal Poly students and a crane install a concrete slab at the CAED Support Lab.