Inside the lab sits a plywood wall amidst an imposing steel frame, taking up the majority of the two-story, hangar-like space. The testing site is simultaneously grand in its scale and its intrigue.

Dennin and Claypool have designed and built the massive plywood shear wall that sits before the group. Now their dedication to both creation and destruction is about to be realized. Amid the steel frame, a linear actuator—akin to a massive horizontal hydraulic jack—will be used to pull on the wall to simulate earthquake loading. Measurements from this experiment will allow the student researchers to better understand the wall’s structural behavior in a seismic event.

This was made possible by an extensive $340,000 grant from the National Science Foundation (NSF), an agency funded by the federal government that seeks to heighten progresses in scientific and engineering fields. The NSF grant-writing effort was championed by ARCE professor Anahid Behrouzi. According to Behrouzi, this grant application was successful only thanks to the efforts of Cal Poly faculty who collaborated from multiple departments including Architecture, Construction Management, and Civil Engineering.

“The actuator is what allows us to do this kind of testing in the first place,” says Claypool. “Our old one had to be pumped by hand up to say 20,000 pounds. I never had to do that, thankfully. But I know that Professor Behrouzi put in an extraordinary amount of effort to get this new actuator for us.”

The new actuators are automated and have a higher force capacity than before, enabling a broader range of experiments with more efficient and accurate control. This lab upgrade required the installation of new chiller, hydraulic pump, and computer equipment. With the system now on campus, Cal Poly has enhanced interdisciplinary research capabilities and a platform for engaging educational outreach.

Back in December, Deigert’s ARCE 451 “Timber & Masonry Structures Design and Constructability Laboratory” course saw fourth and fifth-year ARCE students examine the aspects of a shear wall necessary to insure good seismic performance. A key component of the class was not only being able to work collaboratively in a team to design a wall, but to eventually conduct a physical test to determine its capacity.

The successful NSF grant has inspired Deigert and two other senior ARCE students—along with the help of Simpson Strong-Tie engineers—to construct a more robust steel reaction frame to accommodate the higher loads capable with the new actuator system. In early February, Deigert and a number of students were able to visit Simpson’s large-scale structural testing facility in Stockton, CA and bring back many lessons they learned to design the frame during the spring quarter. “We were so excited,” he says. “It’s the kind of work that you dream about getting to do, and when you have such a passionate team of people it all just comes together quickly.” 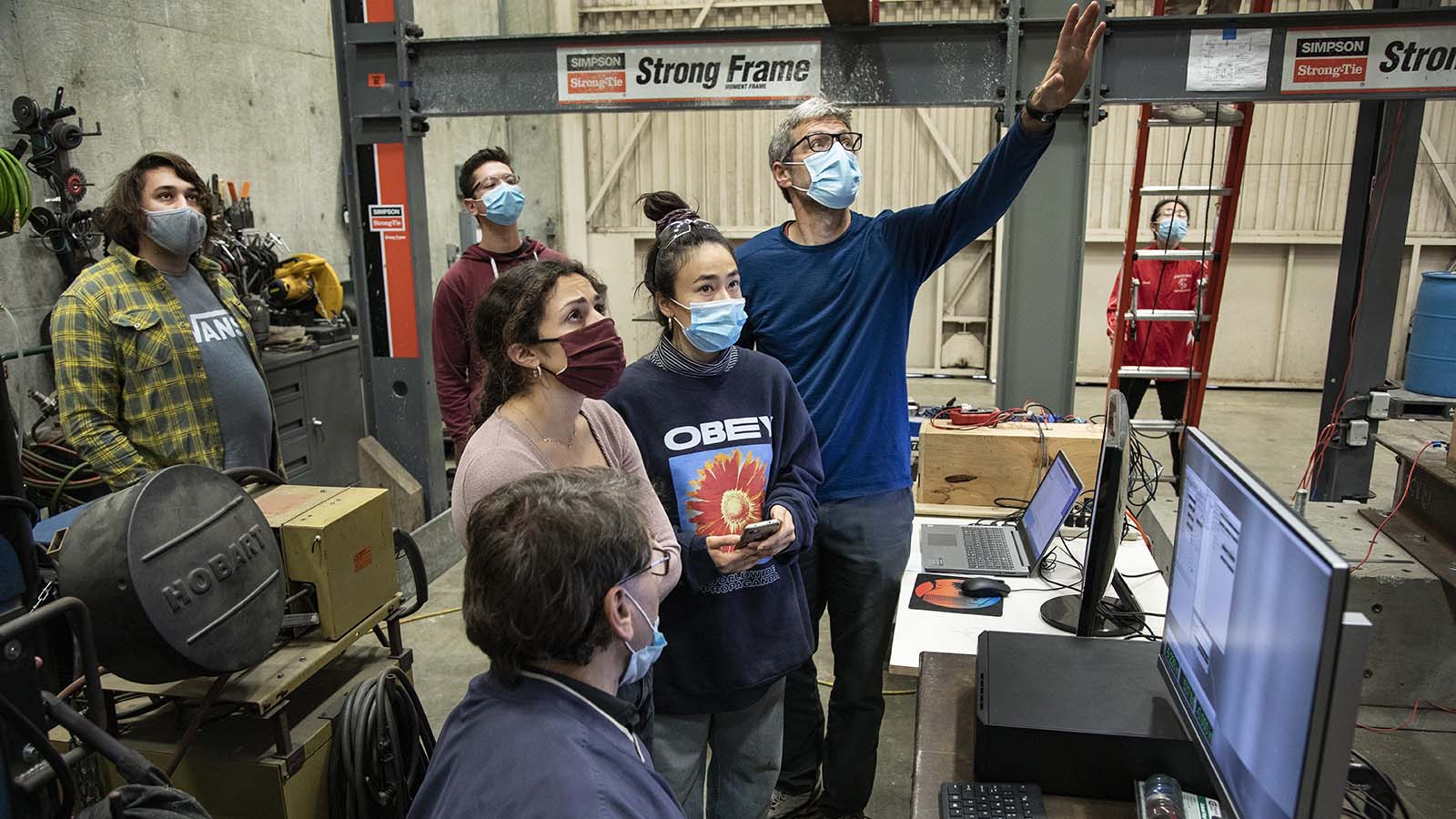 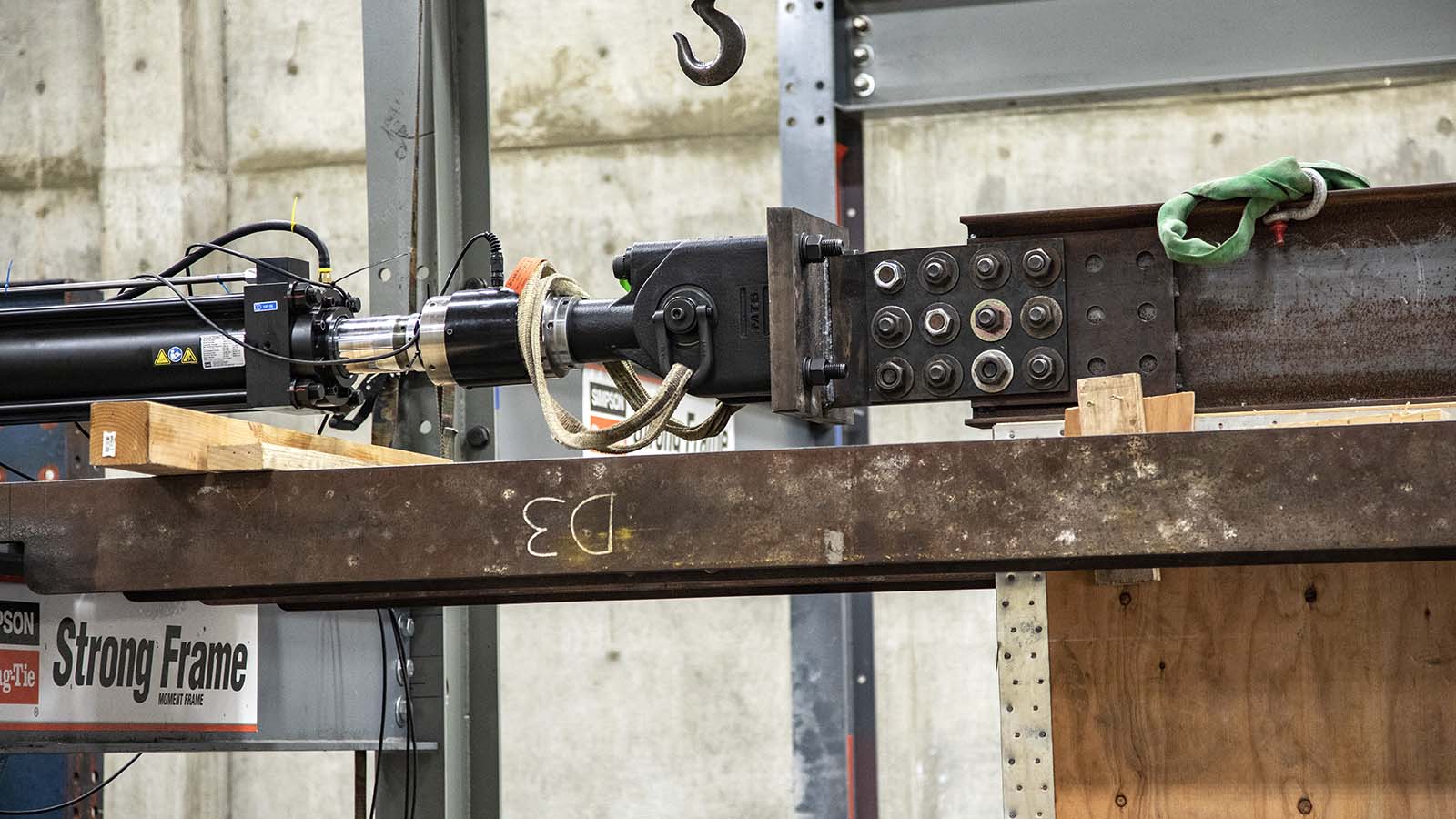 The actuator, which was supplied to Cal Poly with the help of an NSF grant. 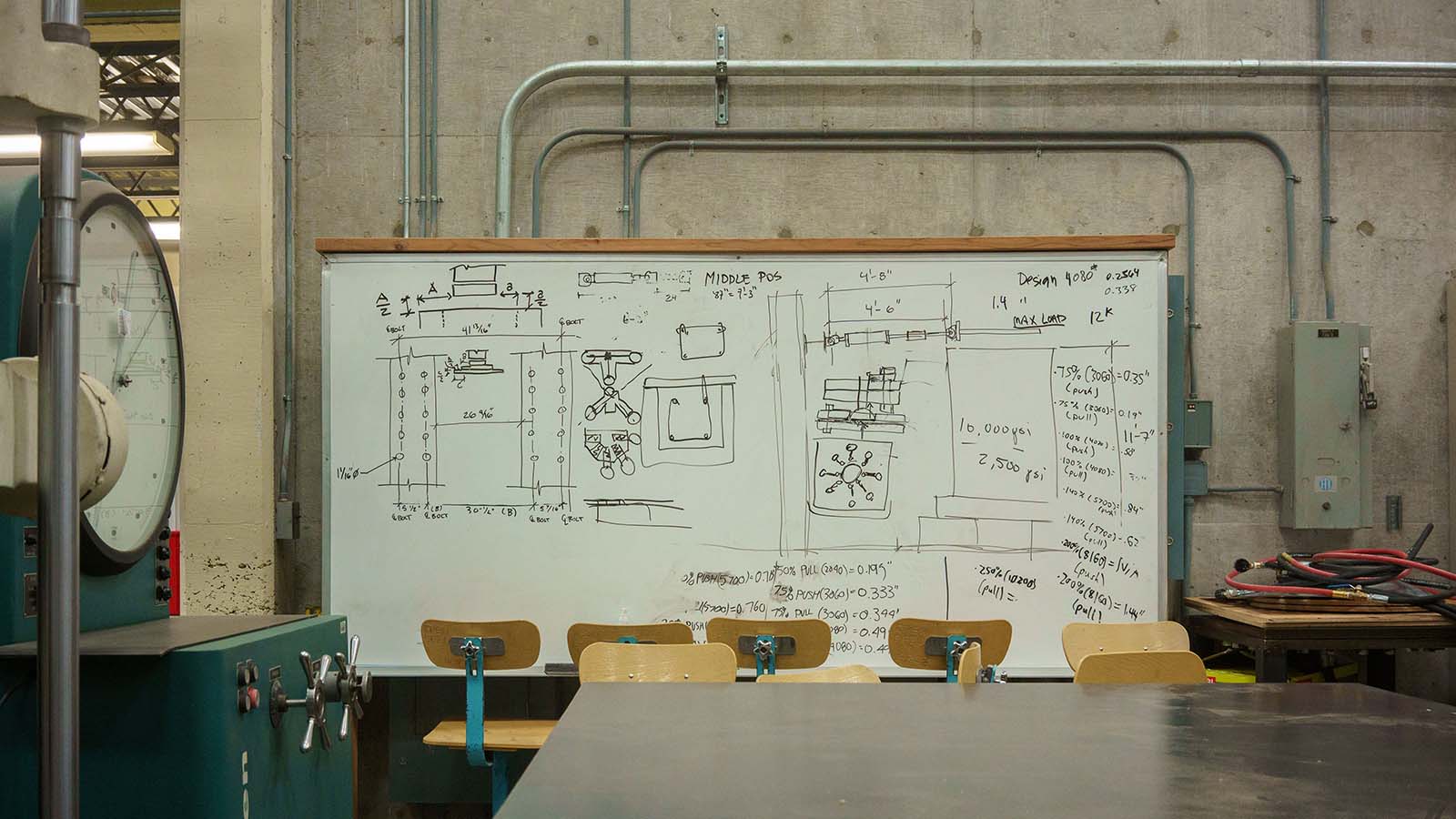 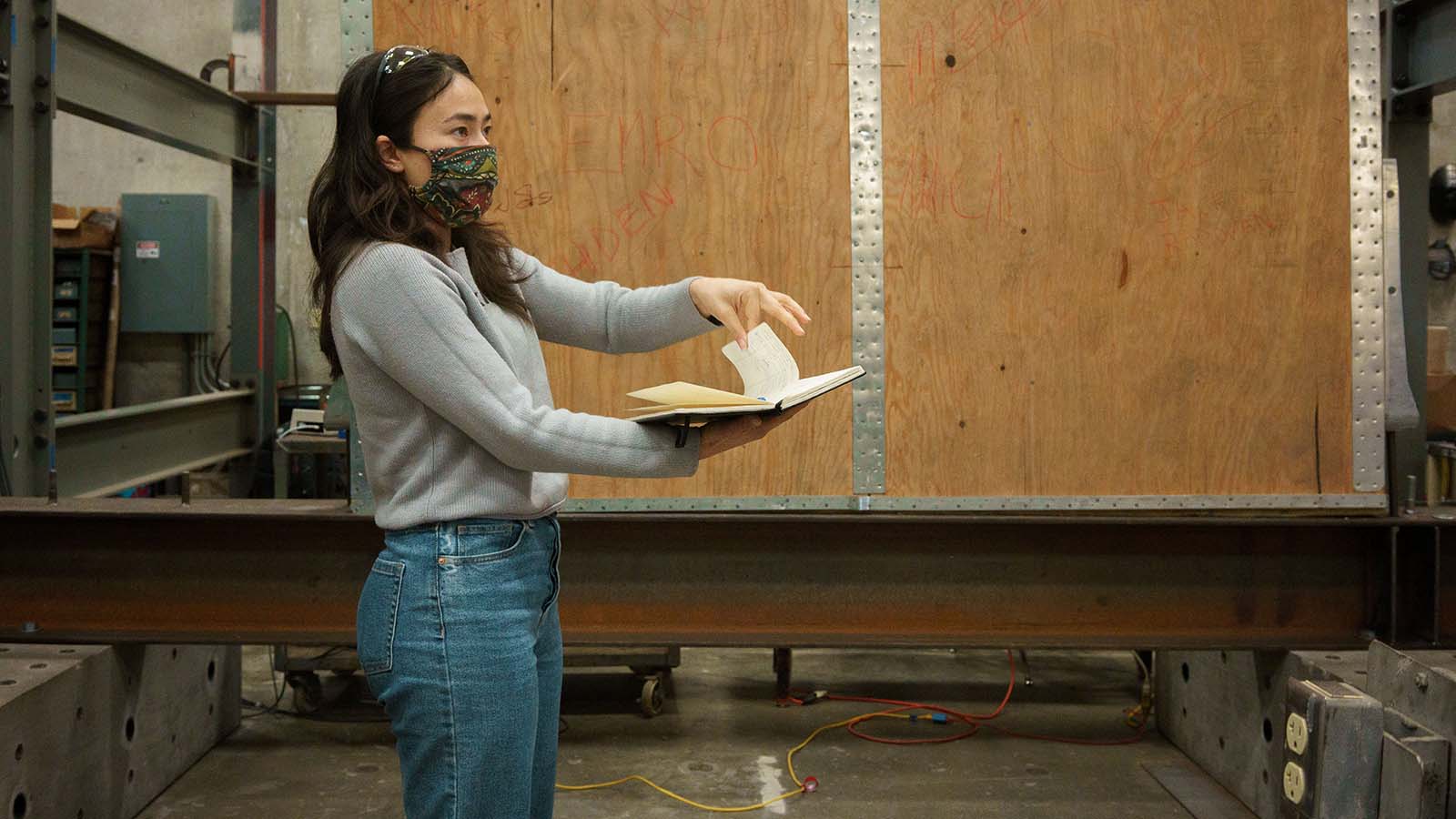 Elizabeth Claypool talking through her notes in the High Bay Laboratory. 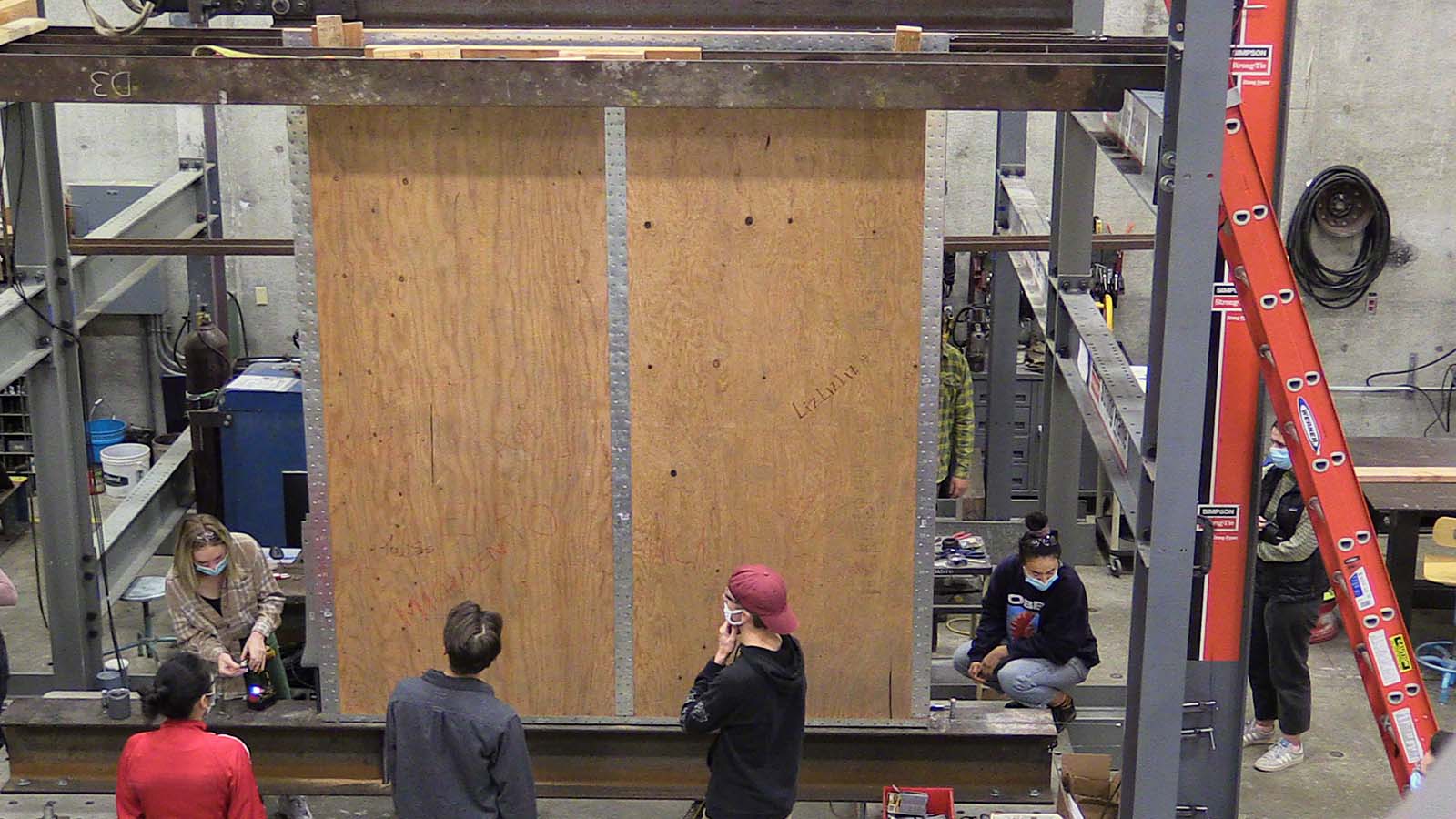 Deigert is pleased with how the presence of the actuator system and the new reaction frame will increase the pace of Learn by Doing experiments for his students. “I was excited because in the five years I’ve been teaching at Cal Poly, we’ve been able to go from the ability to conduct one or two tests per year, to now potentially anywhere from six to ten.”

“What makes this kind of wall so greatly practical is partly the materials used,” says Dennin. “Our design incorporates a reinforcement nail strip that is non-obtrusive and fairly inexpensive. We wanted to find a sustainable solution that at the same time maximized structural integrity in the event of an earthquake.”

It seems the two senior students did exceptionally well in their first wall design—it still had plenty of reserve strength capacity even though the actuator ran out of displacement stroke to continue the test. “We had to reset,” says Peter Laursen, a professor of architectural engineering and a co-principal investigator on the NSF grant, who has been supporting research teams that utilize the new actuator system. “But it wasn’t as big of a deal this time since we knew what we were aiming for space-wise.”

Today everything is in accord now that the actuator is re-positioned to allow for additional displacement stroke. A hush falls over the team as they prepare to begin the test. The students play out their roles with ease, checking sensor measurements with a familiar and comfortable routine. The gauges have been verified as accurate, the live data graphs are recording, and the cameras have long been ready for the action.

“We’re essentially trying to break the wall,” Claypool tells the onlookers in the laboratory.

As the test begins, an increasingly loud set of creaks emanates from the wall. Pound after pound, cracks and groans erupt from the imposing construction. The actuator loads slowly and precisely, its exact pounds of force being called out with awe by the team.

The gasps and wild-eyed expressions set the scene enough to convey the message that what is being done is no small feat. At 38,000 pounds of force, a monumental load, the team decides to call it, as their mud sill begins to crush and their nail strips start to buckle.

“We didn’t break it but that’s okay,” says Claypool. “This is even better.”

There is a seismic sense of joy shared by the team and their collective accomplishment.