For avid surfer and computer science student Grace Nolan, a new research project aimed at using drones to track how sharks and humans interact has been the perfect way to combine her interests in ocean biology and artificial intelligence.

“I have always spent time in and around the ocean and the notion of helping protect it and its inhabitants sounded very appealing to me,” Nolan said. “I believe that this technology will be instrumental to the way we look at the ocean, especially now that we can do so in a non-invasive way.” 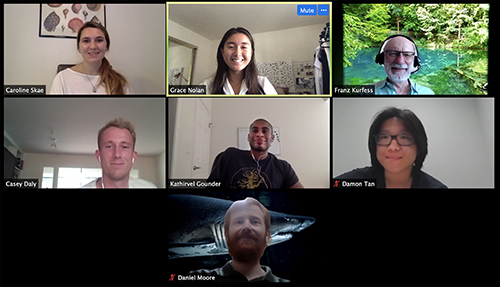 “The goal is to automate ingestion of drone video data and flight metadata to generate spatially explicit information on water recreational activities -- when, where and who is interacting with sharks along the coast,” said Chris Lowe, director of the Shark Lab. “Since human and shark beach activities are correlated to environmental conditions, the ultimate goal will be to use a series of environmental variables, such as water temperature, solar index, wave height and direction to predict where people and shark encounters might be most likely to co-occur.” 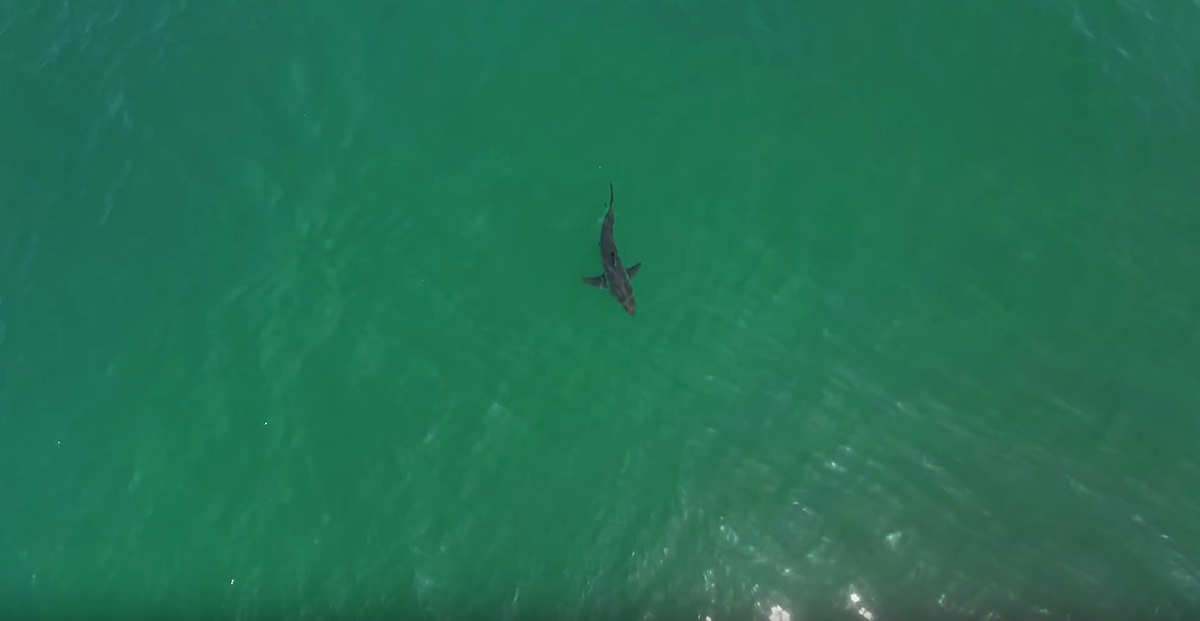 Sharks attacks are rare, according to the Shark Research Committee, with only 14 fatal attacks along the California coast since 1952 (including the death of Cal Poly student Peter Savino, who was killed in 1957 by a great white shark in Morro Bay). Yet, experts say the population of great white sharks – responsible for 90 percent of attacks in California -- is increasing along the West Coast. And since they can grow to be a dinosaur-like 20 feet in length, that represents a health threat.

“The biggest challenge for me has been learning the ropes of artificial intelligence and how the system works, in terms of image recognition,” Nolan said. “I’ve found that being thrown into the deep end with such an abstract discipline as AI has been one of the best and most rewarding ways to learn. It’s really not as intimidating a topic as the reputation that precedes it.”

Nolan said deep neural networks and machine learning fall under the umbrella of AI and form the center of the challenge.

“We are focused on training and using a deep neural network to do the image recognition needed for the project,” she said. “The network describes relationships and patterns in order to recognize objects from pixels in an image. Machine learning is the ability of the program to learn from these relationships and identify similar objects when shown new images.”

The project, which is sponsored by Nic and Sara Johnson, builds off the preliminary research conducted by two of Professor Franz Kurfess’ computer science classes last fall. Kurfess said the SURP team hopes to improve the accuracy rate of the drones currently used by the Cal State Long Beach researchers.

“While our initial work confirmed that our approach is viable, and the results deliver accuracy rates of about 80 to 90 percent with limited data sets and training efforts, we believe that there is significant room for improvement through a more concentrated effort by the SURP team,” Kurfess said. “The team has made impressive progress, and importantly, the students seem to be having fun with the project.”

Ultimately, Lowe said, he hopes the project will result in something lifeguards can use.

“While we still have a long way to go, I think through the use of AI we’ll be able to provide the lifeguards forecasts of where and when might be most ‘sharky”’ days so that water users can be forewarned,” he said. “Just like stingray and rip current warnings.”

Student Research Projects Get a $100,000 Boost from Baker and Koob Endowments

The Weight is Over: Two Cal Poly Studies Reveal Strategies to Keep the Pounds Off

Want to Enter a Rattlesnake Den? These Researchers Need Your Help — Don't Worry, It's Remote

'We’ve Made the Best Out of a Difficult Situation.' Kennedy Library's Virtual Programs Help Students Succeed