Written By Jay Thompson // Photos by Laurie Morrison May 19, 2022
Share

Among competitive sailors, there’s small class-boat racing in protected waters and then there’s big boat ocean regattas with all their glory and pageantry.

Cal Poly Sailing Club is well-versed in the former, but big keelboats are a different story: larger crews; more and bigger sails; faster boat speeds; rougher ocean conditions; and should, boats collide, the potential for greater mayhem. In a word: challenging.

In mid-March, the team rose to the challenge, participating in the California Maritime Academy Invitational Intercollegiate Regatta. The regatta, also known as the Los Angeles Harbor Cup, featured three exciting days of racing aboard 37-foot Catalina sloops in the waters off San Pedro’s Point Fermin.

“This is a unique regatta for college sailing and is the only one like it on the West Coast,” said Corey Quillen, a Cal Poly senior studying communication studies from San Mateo, California. “We had individuals on our team with big boat experience. Some were new to sailing such boats, so there was a bit of a learning curve. As always, we succeeded at the Learn by Doing motto.”

Quillen said the team members’ sailing experiences varied according to the areas they were used to sailing in.

“I learned in the (San Francisco) Bay, which can feel like ocean racing at times,” he said. “Kai is from Hawaii, so a lot of his experience is open ocean around the islands. Jack Kisling is from Santa Cruz so he also has ocean experience.”

There were four races on day one of the regatta. Cal Poly finished the first race in ninth place, slowly moving up to finish the day in sixth place. But on the second day of racing, as the team boarded their boat with high hopes, they got a sweet surprise.

“The best race of the weekend was the first one on Saturday where we had a first-place finish,” Quillen said. “It was a proud moment for us beating so many high-caliber teams. We were definitely excited crossing the line on the final leg. That particular race was early in the day, so it wasn't very windy yet. Luckily the course is protected by Catalina Island so there were never any races that had a crazy sea state, but there was quite a bit of current all weekend, which was tricky to work with.”

The winds built to a lively 18 knots over the next three contests, creating challenging conditions for the fleet. The Mustangs finished in back-to-back ninth-place finishes before rising to eighth in race eight.

After two exceptional days of racing, the third and final day brought change with daylight saving time and lighter winds that forced a several hour delay. For the Mustangs, it was not an auspicious start for the final two races.

“It was our worst race,” Quillen said of the 10th place finish. “Those are always a tough pill to swallow.”

Cal Poly rallied in the 10th race finishing fifth and ninth overall in the regatta. Cal Maritime reclaimed the Cup, followed by Hawaii and the Mustangs’ rival, UC Santa Barbara.

“We had a few mishaps that always happen with sailing like bad douses or rounding the wrong gate but nothing too major,” Quillen said. “Our bowman, Sean, dislocated his shoulder briefly and that affected him a bit, but he was a trooper and was still able to work the foredeck.”

“Regardless, the experience was incredible,” Quillen continued. “Harbor Cup is a regatta you look forward to nonstop once you receive the acceptance letter because it is so unique. You are provided all your meals and sleep as a team on yacht club members' boats, so there is little to do on your end except show up and sail on very cool boats. It doesn't get much better than that.” 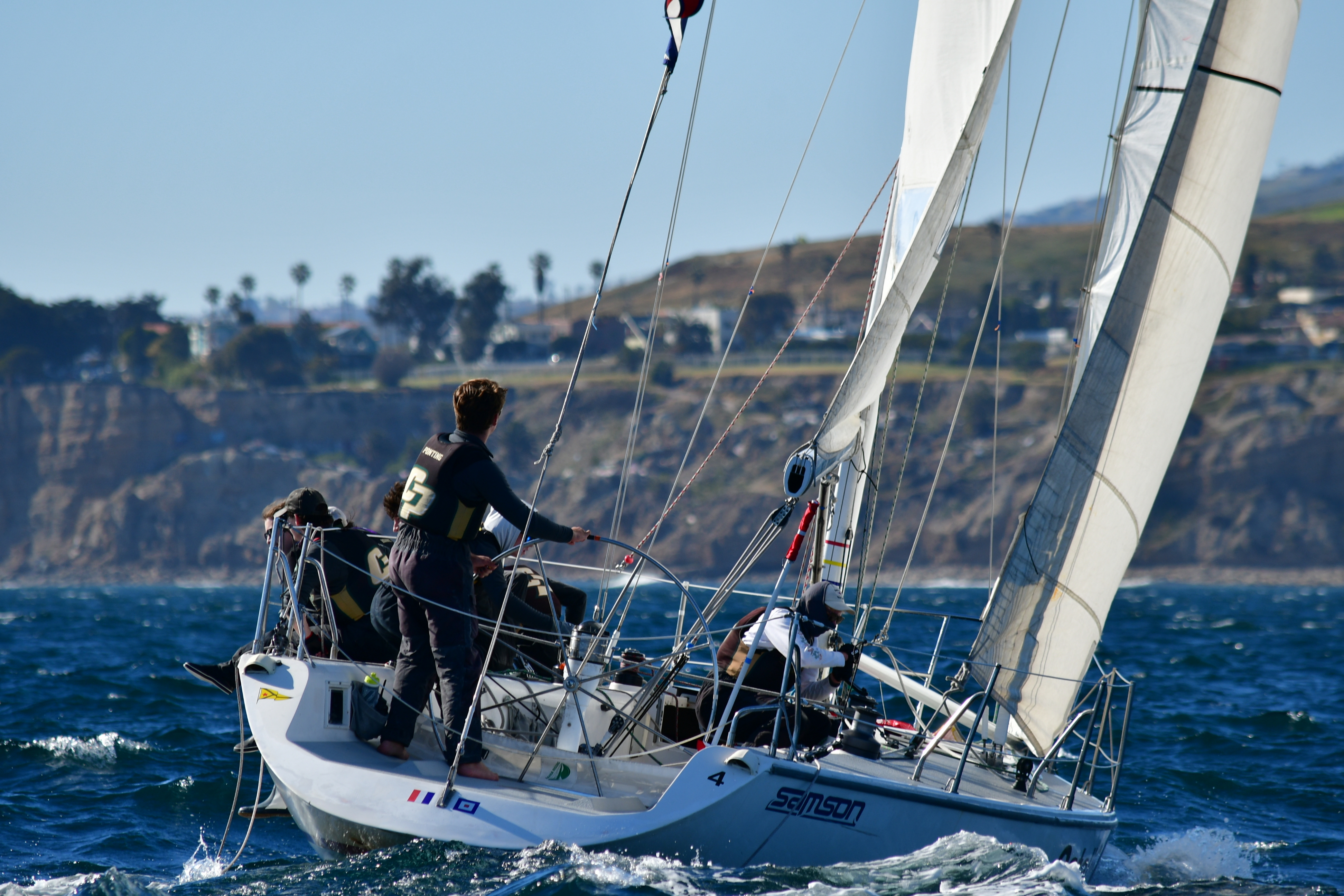 Kai Ponting, a member of the Cal Poly Sailing Club, drives the boat during the Los Angeles Harbor Cup. Ponting, a graduate student in aerospace engineering, plans to become a yacht designer and aerodynamicist.

The Cal Poly Sailing Club sails near the U.S. Naval Academy's boat during a race for the Los Angeles Harbor Cup.

The Cal Poly Sailing Club works to sail their boat during a race.

Cal Poly Sailing Club's boat pictured alongside boats from other universities during one of the races for the Los Angeles Harbor Cup. 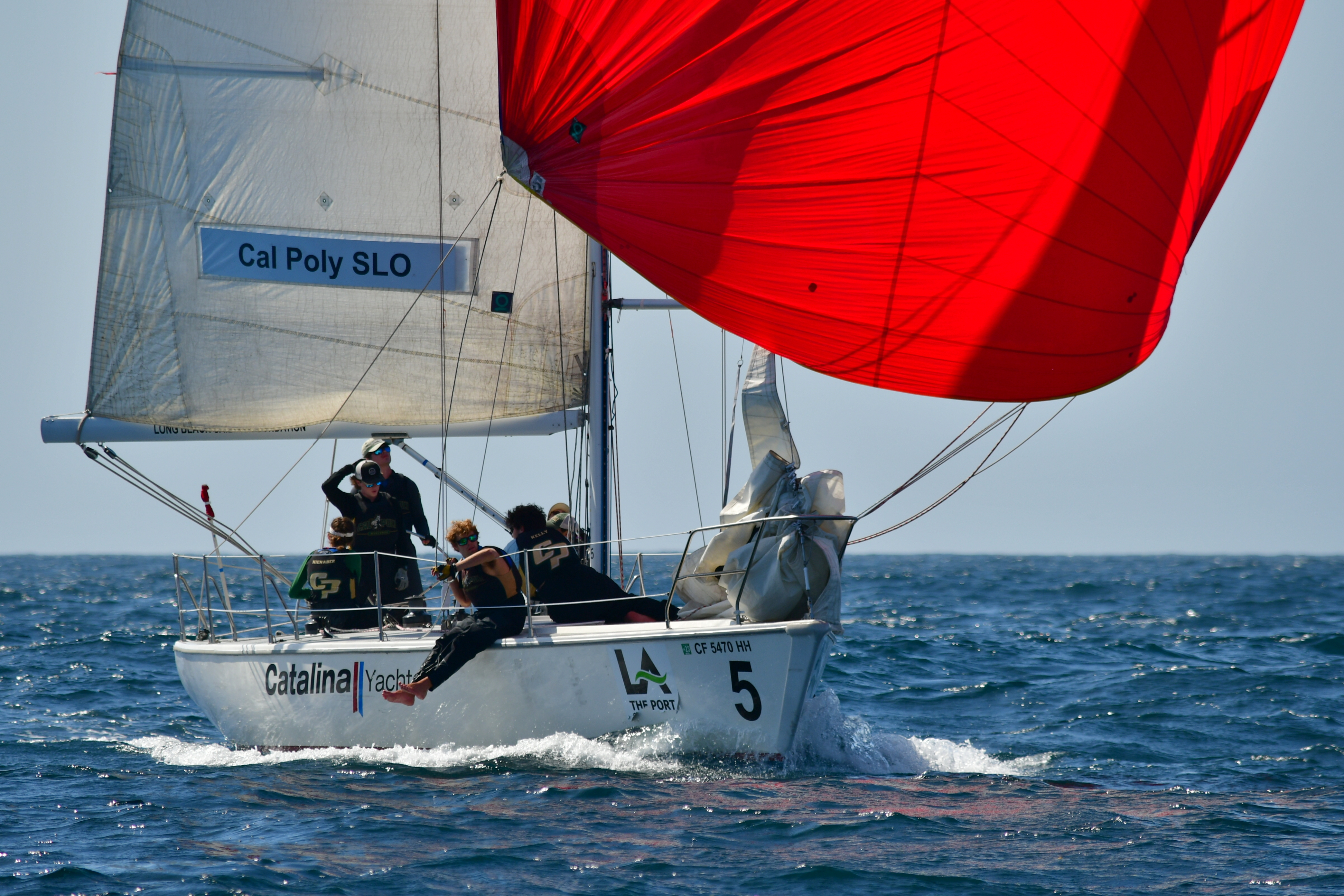 The Cal Poly Sailing Club on their boat during a race for the Los Angeles Harbor Cup.