A partnership between the Cal Poly Creamery and the second largest school district in San Luis Obispo County will soon provide farm to table staples such as cheese, eggs and milk to families who may be struggling in the face of the COVID-19 pandemic 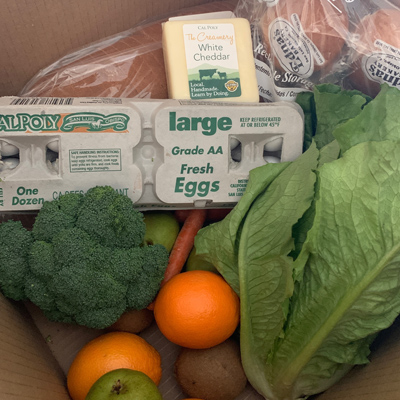 Each week more than 1,800 students are provided with a free weekly meal kit by the San Luis Coastal Unified School District – filling a needed void for many families who have encountered unforeseen challenges since the onset of the pandemic. The school district is shifting its weekly meal kit from prepared meals to a pantry box, with Cal Poly student-produced foods front and center.

The partnership is a win for both Cal Poly and the school district – aiding student success by providing more campus jobs for Cal Poly students who are interested in dairy production, food science and nutrition allowing them to gain real-world experience they will take with them into the workforce and by providing needed, nutritious foods to thousands of students living in San Luis Obispo County.

Craig Russell, who oversees Cal Poly’s dairy operations, said the partnership is also rewarding in unconventional ways, as it allows college students to contribute to the greater good of society while demonstrating their commitment to furthering their education. The Cal Poly Creamery also recently donated more than 240 pounds of cheese to the Cal Poly Food Pantry. “These students are now putting their products out to younger people from kindergarten through high school and showing them the potential of what they too can learn in college if they choose to.”

The journey from the onset of the pandemic to now has involved continual pivoting to adjust and continue operations. For Russell that meant ensuring that daily operations of the Cal Poly Dairy continued with fewer students and that Learn by Doing opportunities remained available. For Erin Primer, director of food and nutrition services at San Luis Coastal Unified School District, it meant rethinking how school aged children were fed on a daily basis.

“I will forever remember Friday, March 13, as the day that K-12 schools shut down,” said Primer. “In food service we immediately knew that we needed to find a way to continue to feed kids and it has been a very interesting exercise since March in learning how to do the same types of things we had done in the past, but now, in a very new way.”

The months long process has reinforced Primer’s ultimate goal of building a healthy meal plan that incorporates plant-forward foods with an emphasis on farm to table education. Primer has partnered with more than a dozen local producers to provide key ingredients such as locally sourced grains and produce. The new partnership with Cal Poly will now add cheese, eggs and ultimately, milk, to the list.

“We are abundantly lucky to have people who produce incredible products and who are willing to partner with schools because on a core value level we get it,” said Primer. “If we expose children to good, high-quality, delicious foods, they will learn to seek those out. These kids are the consumer of tomorrow as and they grow to value local food systems, they will eventually go out and buy those products themselves.” 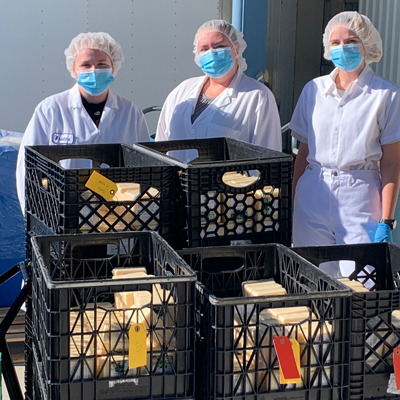 The school lunch boxes, subsidized by the U.S. Department of Agriculture, are provided free to any student who is 18 years or younger – regardless of the school they attend. An assortment of items have been provided, including cooked entrees, fruit, juice, milk and snacks such as sunflower seeds, cereal bars and crackers. In all, since March, more than 500,000 meals have been provided to the community.

Primer said it was kismet that brought Cal Poly and the school district together. During a virtual cooking class held over the summer a student asked where the district sourced its milk; that student happened to be Russell’s daughter. Primer and Russell connected and just recently the first shipment of more than 1,500 blocks of cheese and an equal number of eggs was transported from the Cal Poly Creamery to the school district.

“We got connected in a way that would not have otherwise existed without the pandemic,” said Primer. “We share a vision of what farm to school looks like and we are now making that happen.”

The new pantry boxes, which will continue through June, will include staples needed for a week’s worth of meals such as bread, eggs, cheese, and produce. The partnership with Cal Poly will continue beyond that. “This is really more than what is for lunch today,” said Primer. “This is about how we build respect into the food system and how we cultivate food for tomorrow. If we tell the story of how something got to the plate, kids are more inclined to enjoy it.”

Mustang Made: Students Craft Products for the Holiday Season