'I've Been Dreaming of This Every Day.' Recent Grad Heads to Tokyo to Cycle for Team USA

When Christopher Blevins moved into the Cerro Vista residence hall in the fall of his freshman year, he attached a sticky note to his wall with one word on it: Tokyo.

Five years later, the Mustang is on his way to the Olympics in that city to compete for the United States in the men’s cross-country mountain bike race on July 26.

“I’ve been dreaming of this every day for the past five years,” Blevins said. “I knew that this was going to be a hard process to go through, but it’s super rewarding.”

But it wasn’t all smooth sailing — and it was complicated, like everything else, by the arrival of the COVID-19 pandemic in March 2020. Blevins, who typically took spring quarters off to race, found himself registering for classes last-minute, trying to get on top of his school schedule as it became apparent that racing wasn’t going to happen for a while.

As Blevins completed courses virtually, he continued to train as he awaited a decision on whether or not the bike racing circuit would continue in 2020. Ultimately, the delayed Olympics gave Blevins extra time to train and get better before the global competition, he said.

“I’m so fortunate cycling is as socially distant a sport as there is,” he said. “I was able to train for the Olympics better than I ever hoped to. It was huge to have that extra year to get stronger.”

Blevins, who graduated in March 2021, credits his Cal Poly courses with helping him become a better cyclist, and vice versa. He majored in business administration with a concentration in entrepreneurship, which was especially helpful as athletes in his type of sport tend to market themselves as their own brand and business. 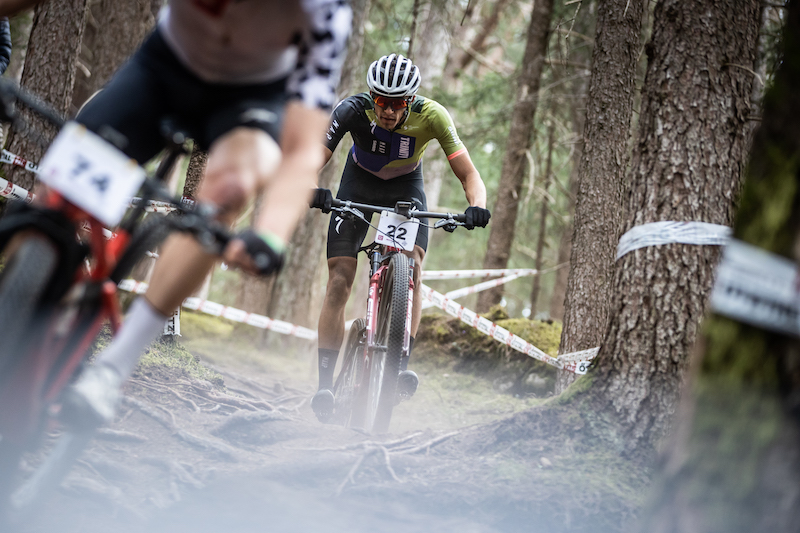 “The classes I took at Cal Poly that were getting me ready for the real world and working with groups has absolutely helped me be a better athlete and teammate, and the sport of cycling has taught me so much that parallels my education,” he said. “The two are mutually beneficial to each other and that’s been complementing my whole racing career.”

Looking toward the future, Blevins said he hopes to connect his career as a cyclist to grassroots, community-oriented efforts to get people on bikes.

“I want to work with nonprofit partners to have initiatives and fundraisers for them and host camps to get kids on bikes and share the stoke that I grew up in,” Blevins said. “It’s really what I am called and love to do.”

Though being in Tokyo won’t play out exactly as Blevins envisioned it all those years ago in Cerro Vista — his parents and friends won’t be able to go, and for safety reasons he’ll be in Tokyo for an abbreviated time period — he’s looking forward to the chance to race, represent the U.S. and do his best.

“It’ll be a different Olympic experience, and not having those things is a bummer, but what I’m really excited for is the chance to race and do my best there,” Blevins said. “I’m simplifying my focus on that.”

Blevins won’t be the only Mustang at the Olympic games: alumna Sierra Hyland will be pitching for Mexico’s women’s softball team and alumnus Joey Wagman will pitch for Israel’s men’s baseball team.

A Mace, Mortal Kombat and a History-Making Grad: Six Things to Know About Commencement

Kin Who Win: For These Mustangs, Their Sport is a Sister Act