Design Village returned to Cal Poly for the first time since 2019, transforming the sloping hills of Poly Canyon into a bustling community of temporary, student-built structures.

About 500 students from Cal Poly’s College of Architecture and Environmental Design and several California community colleges participated in the competition April 22-24, which challenges students to design structures they can easily set up, transport and disassemble — and can also be used as a shelter for the weekend.

Normally a key course for first-year architecture students, this year’s Design Village included second- and third-year students, who were not able to participate when the COVID-19 pandemic prompted cancellation of the competition in 2020 and 2021.

“This project is one of the reasons I chose Cal Poly,” third-year architecture major Garrett Kennedy said. “There was no way I was going to let this opportunity pass. You learn so much.”

Kennedy and fellow third-year architecture majors Lauti Perez Blua and Robert Heckey spent the first four weeks of spring quarter swiftly planning and constructing “Tumbleweed,” a structure designed to shrink and expand like a Hoberman Sphere, which won the audience choice award. The teammates slept on a spider-like web inside the expanded orb.

“This project really emphasizes the Learn by Doing part of the architecture program,” Perez Blua said. “You’re making something so big. You wouldn’t normally make something like this until after college. This is so unique to Cal Poly.” 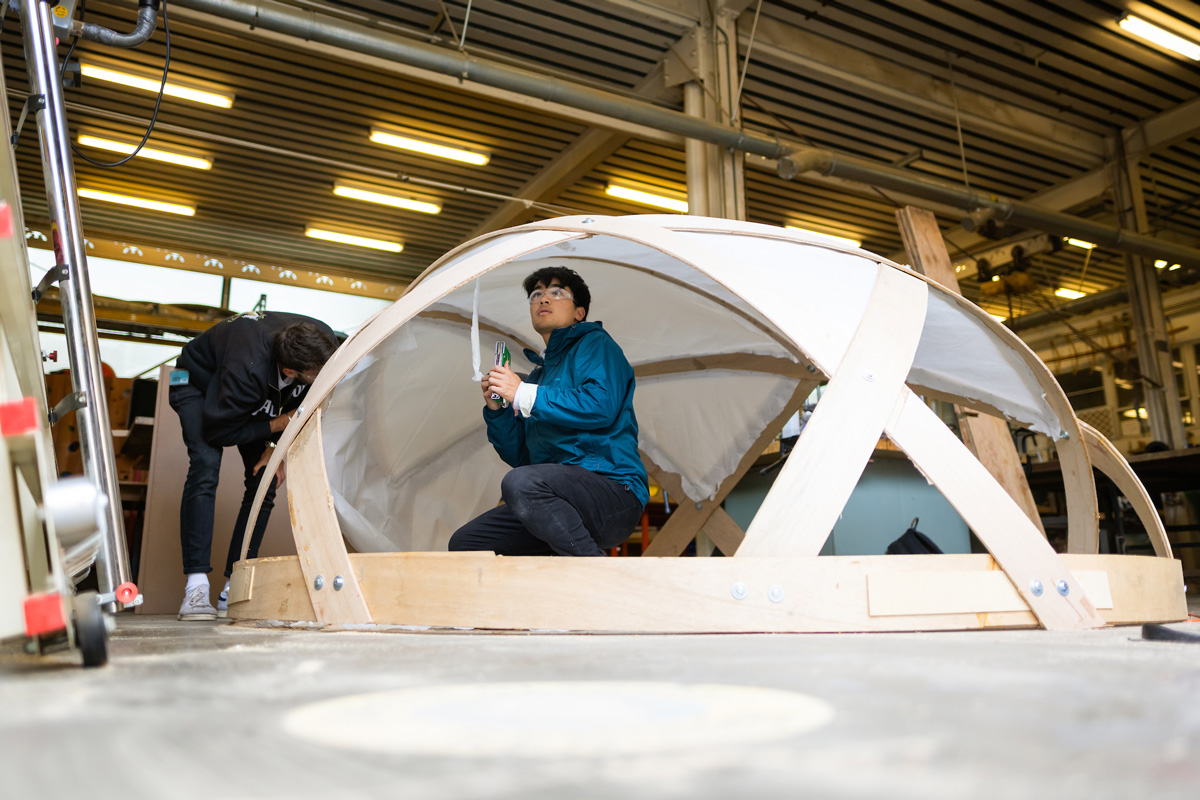 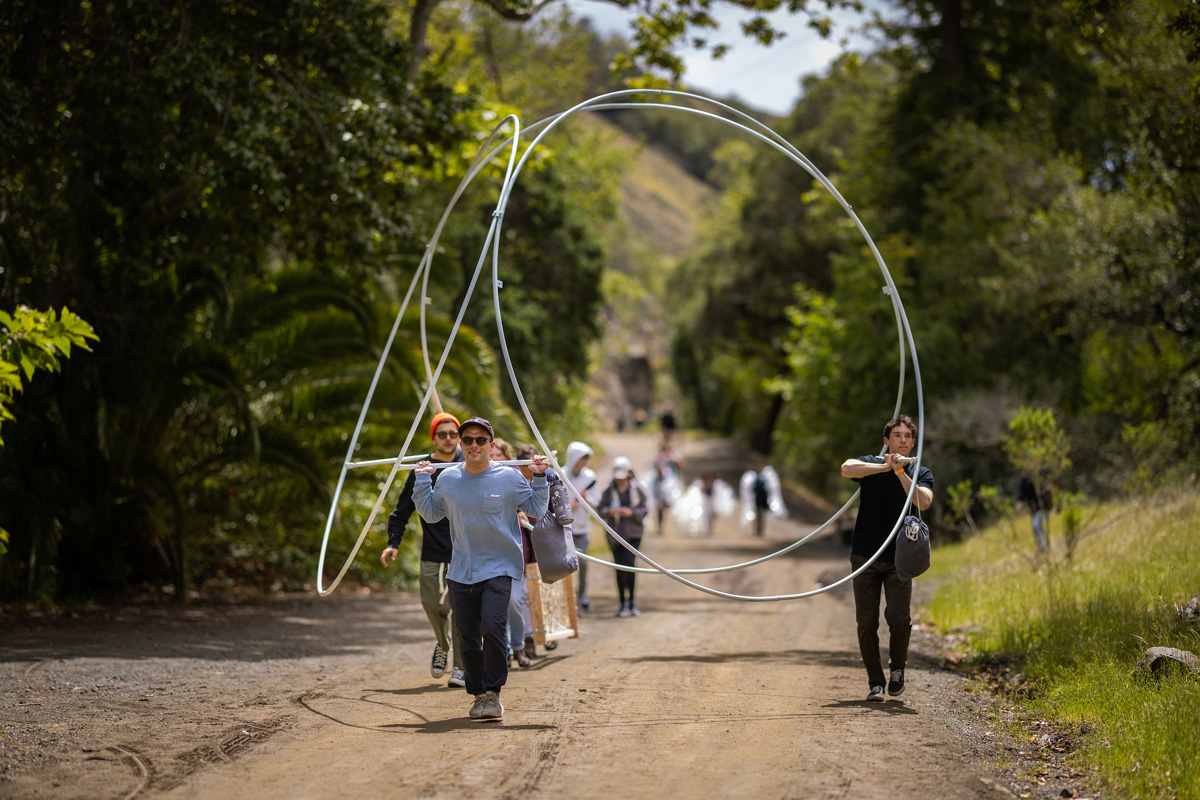 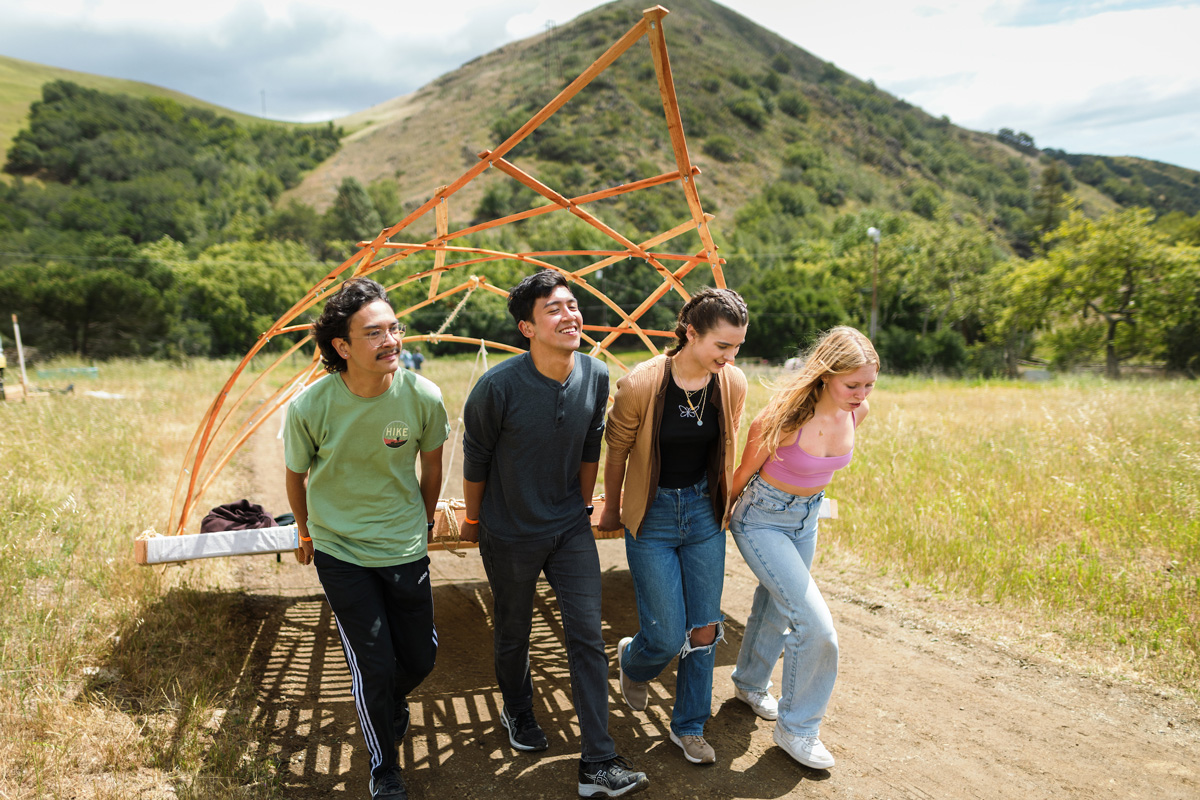 Some designs incorporated wheels to ease transportation to Poly Canyon 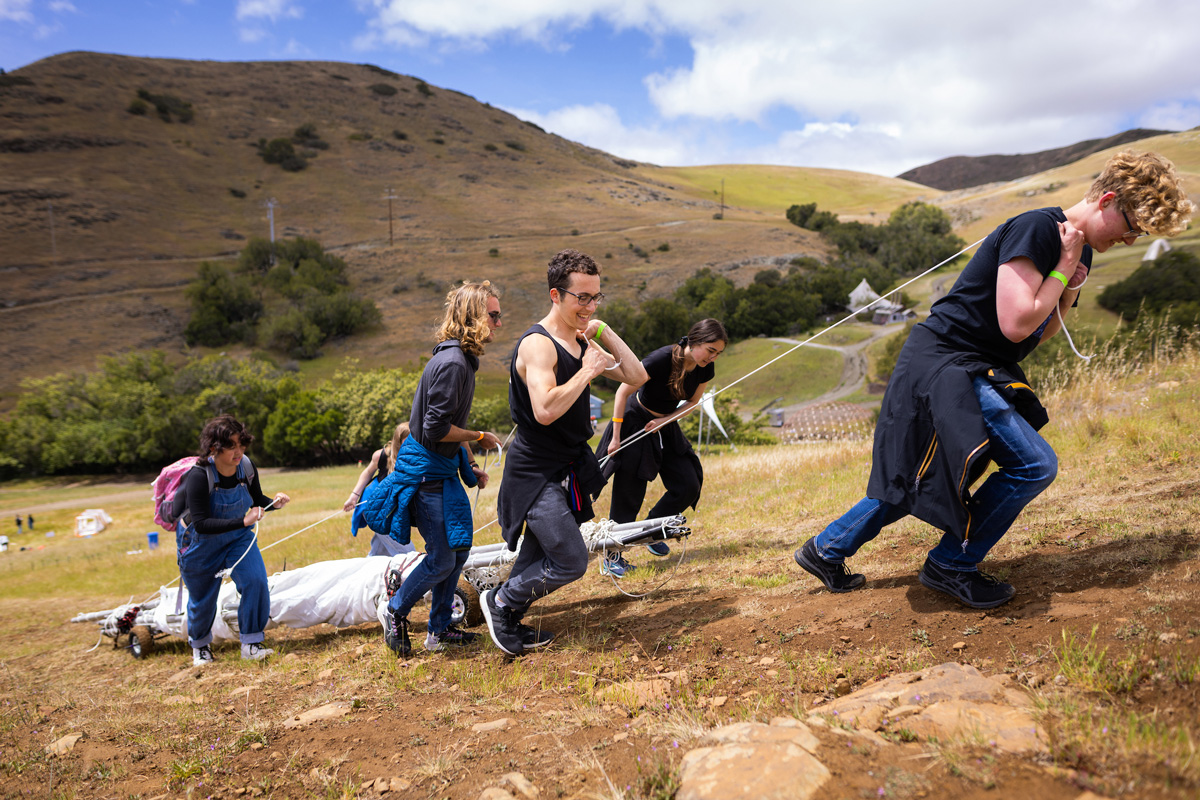 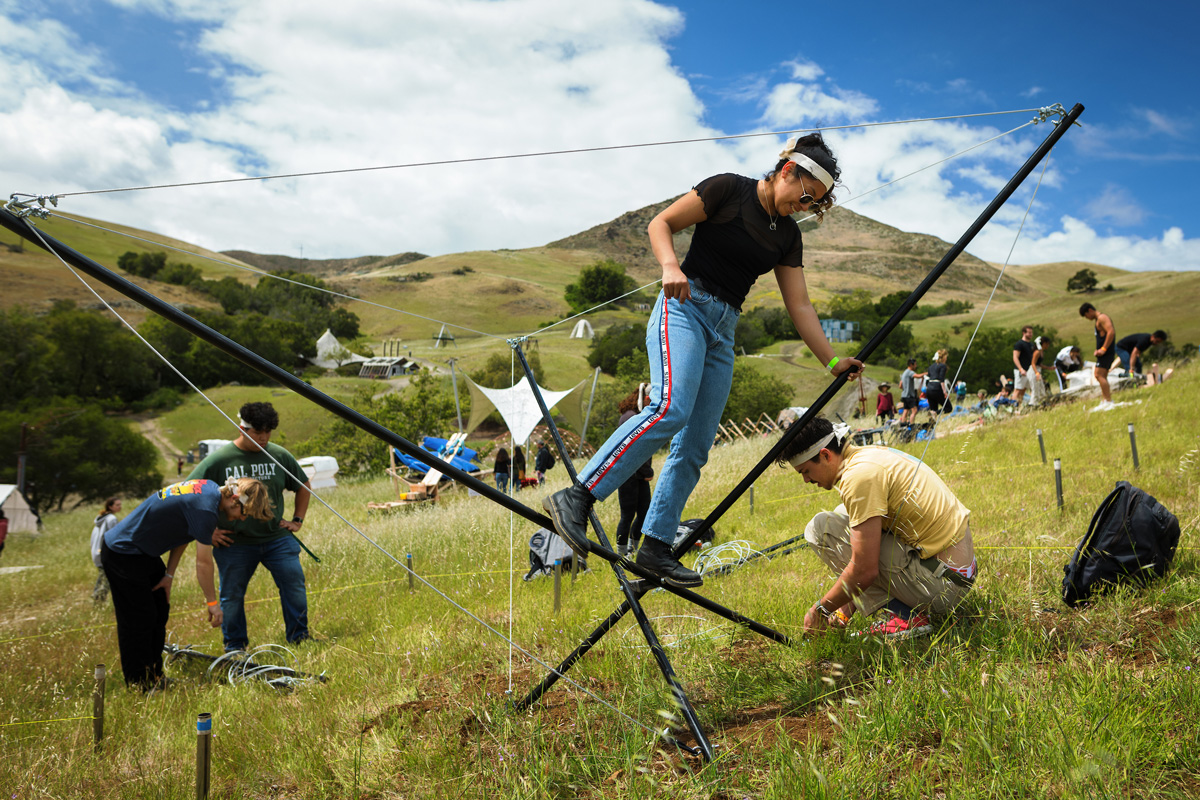 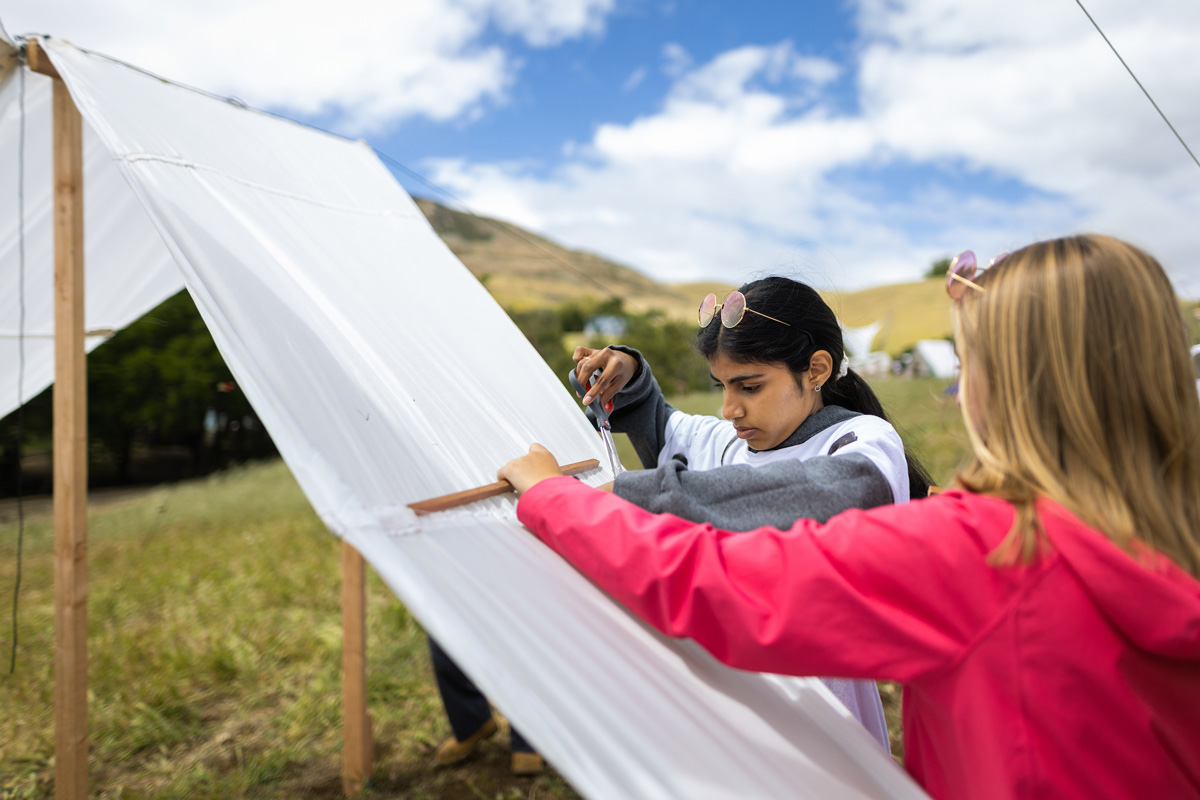 Once in the canyon, students used hand tools to assemble and reinforce their creations 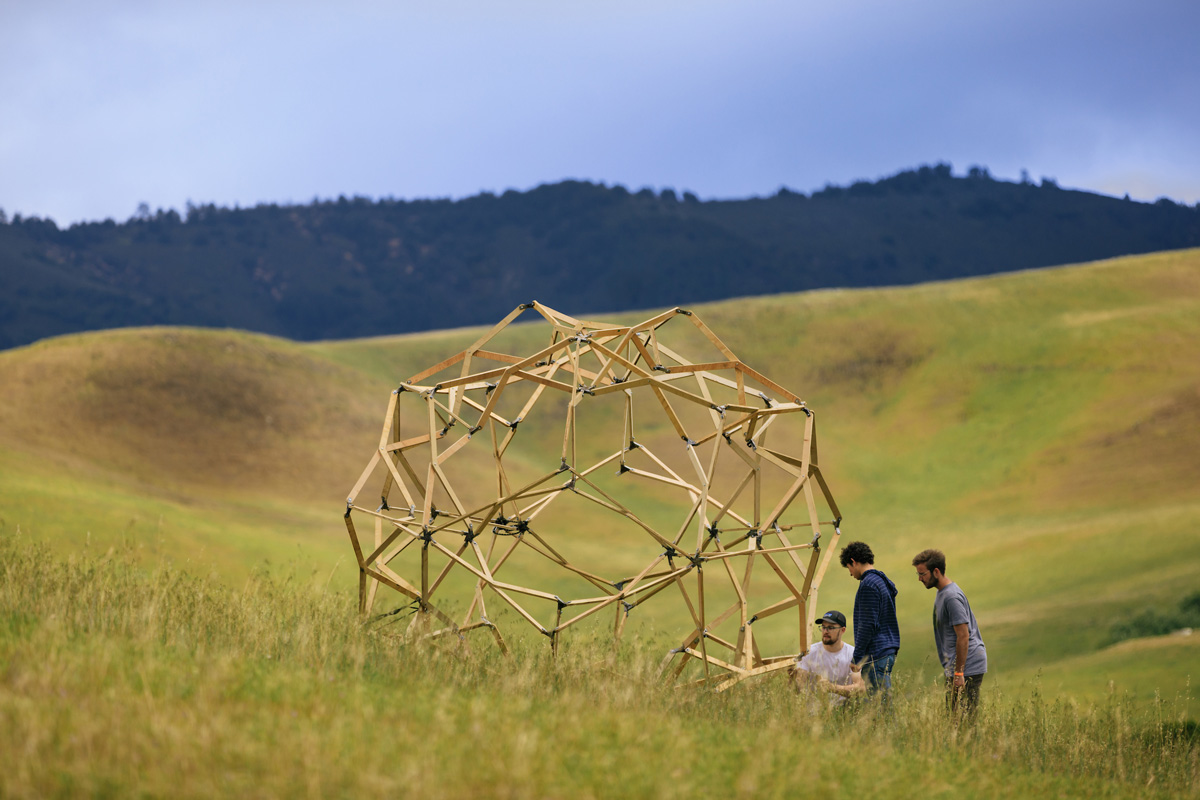 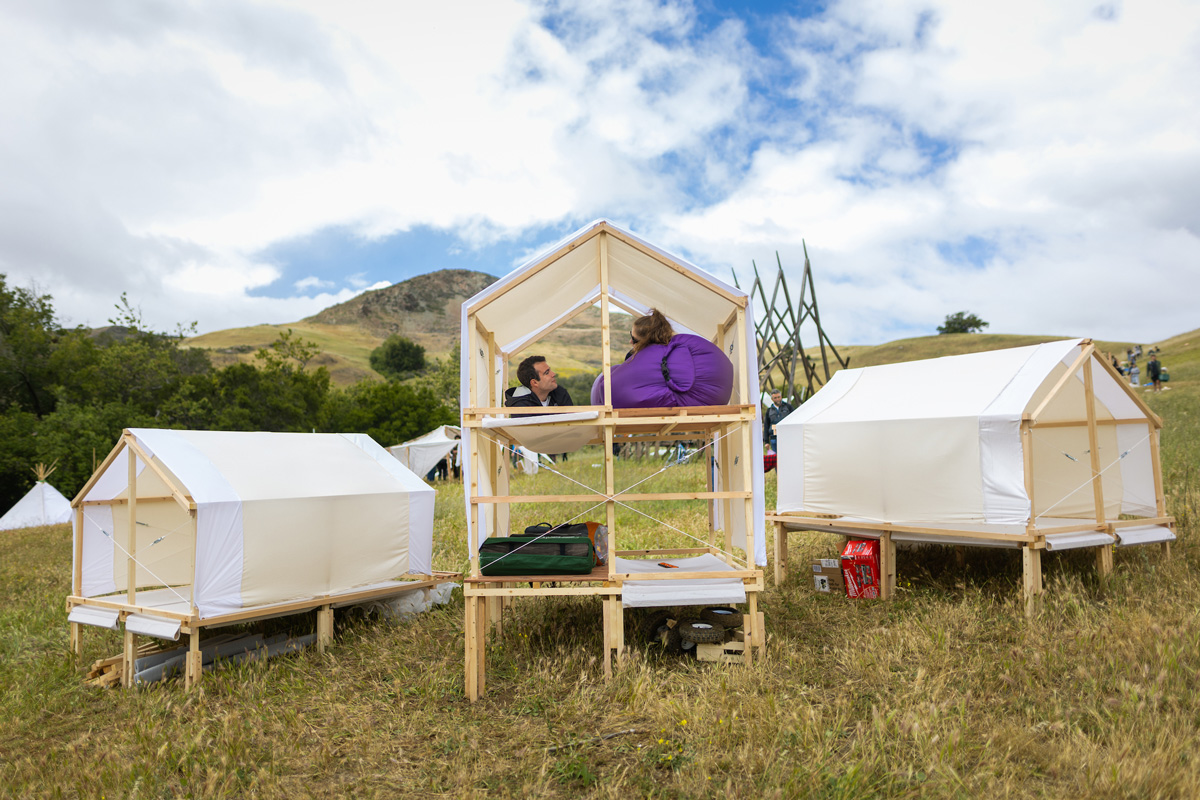 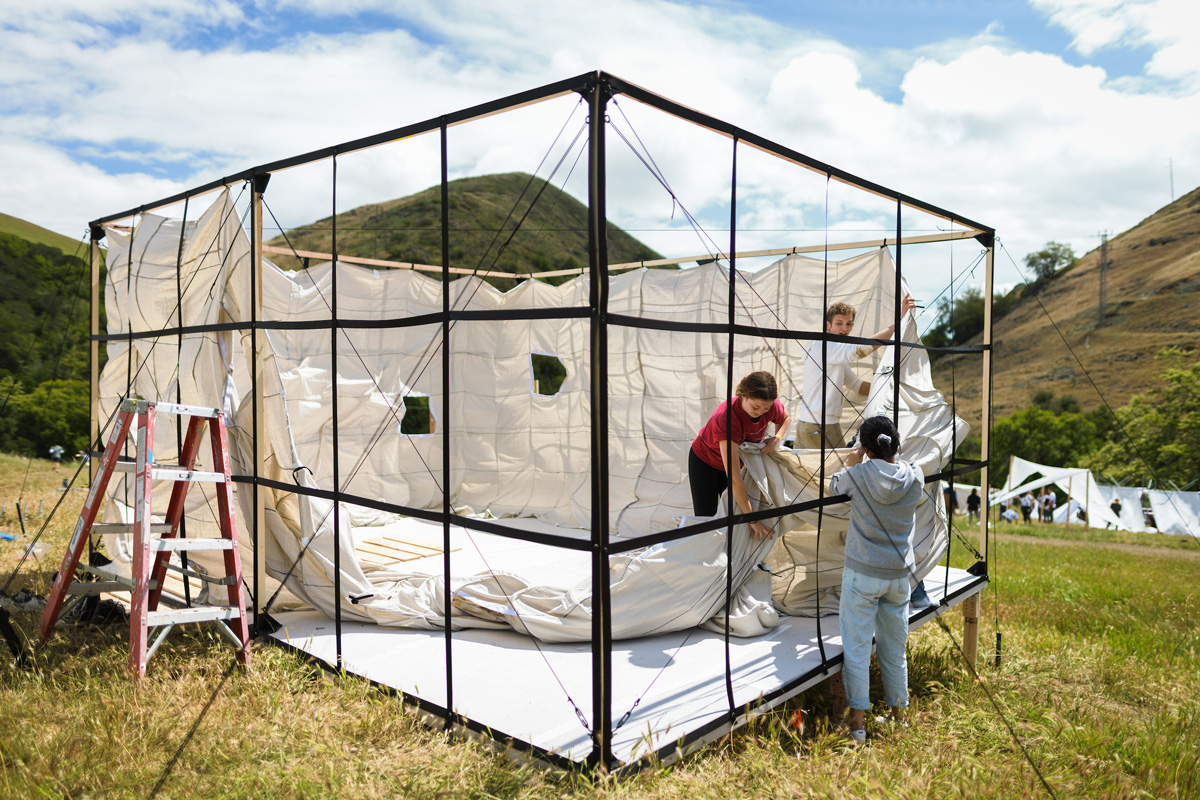 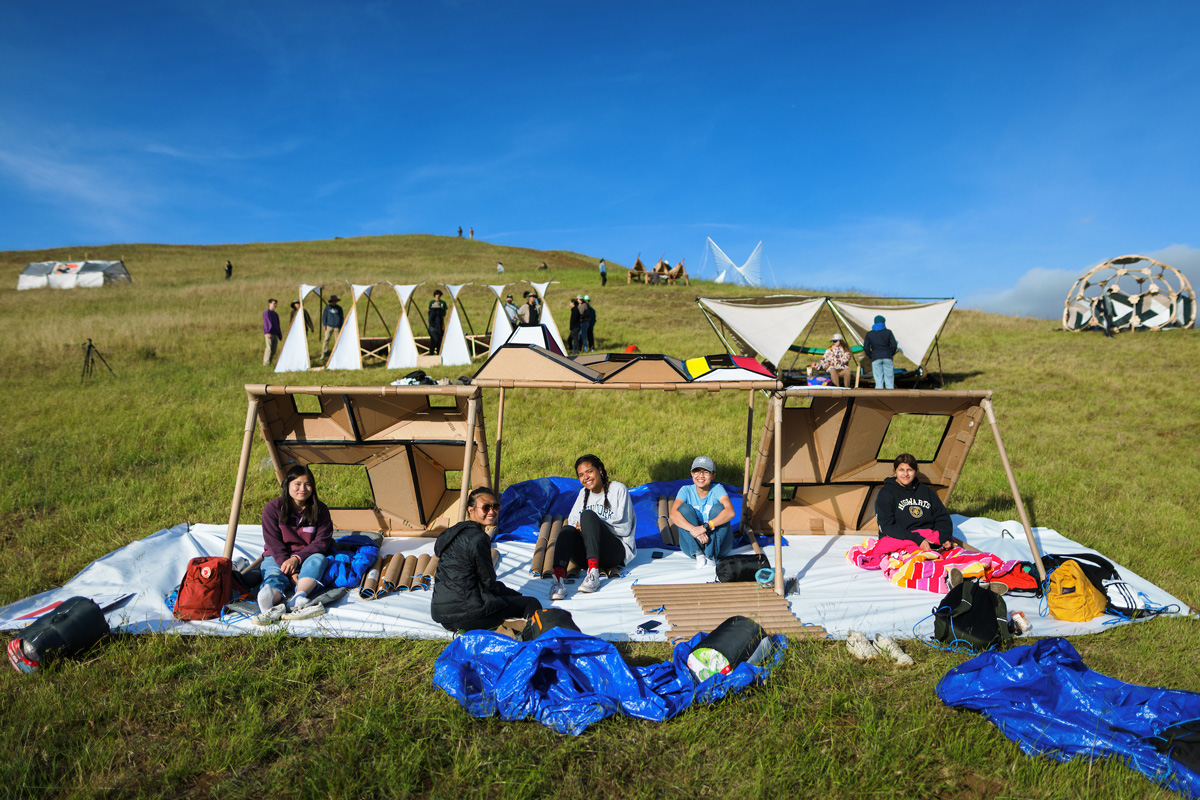 Once assembly was finished, teams enjoyed the camaraderie of the creative community in the Design Village

The competition started Friday, April 22, a cloudy Earth Day punctuated by rain showers. Students had to transport their structures by hand to Poly Canyon, pushing, carrying and otherwise lugging them nearly a mile up Poly Canyon Road. Judging was held Saturday, April 23, and members of the public were also invited to hike, bike or take a shuttle into the canyon to view the designs. (Only the external teams from the community colleges, which this year included 15 teams of about 80 students, were part of the judged competition, with the exception of the People’s Choice award.)

This year’s theme, “Eternal,” introduced the concept of designing a structure that transcends time and space, and encouraged competitors to use sustainable materials to reflect this movement in contemporary architecture.

Cal Poly second-year architecture major Emily Lahey and her team were challenged to incorporate plastic cups — which can take several hundred years to decompose — in their structure. They designed “Cascade,” using about 950 clear, yellow, pink, blue and purple plastic cups to form an operable shade that could be raised and lowered, and fashioned trampoline tubing and mats to create hammocks for sleeping.

“A big draw to Design Village is learning of all these skills you’ve never done before, like welding in the CAED Support Shop,” Lahey said.

Nearby, members of Cal Poly’s “Cloud Fünf” team rested on their structure, comprised of 30 white dunnage air bags that the team stacked vertically to create a cube held together with a grid of two-by-two posts.

“These have a massive presence, but they’re really light,” Cal Poly second-year architecture major Spencer Rosner said while mulling how the design reflected the “Eternal” theme. “They don’t interrupt the Earth that they sit on. They can be deflated and used again and again.”

Like other teams, Cloud Fünf faced last-minute challenges when setting up their structure — but that’s all part of the learning process, Rosner said.

“There’s so much that’s idealistic when going into a design,” Rosner said, “and then you find flaws. It’s working with what you have and adjusting, which is what we need to be able to do as architects.”