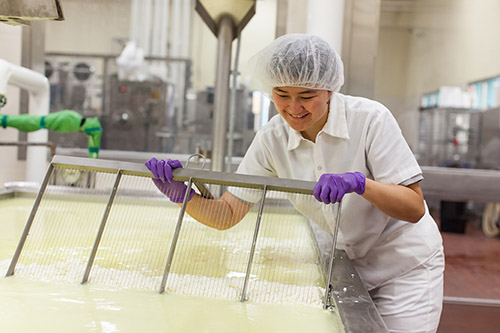 Cal Poly earned a third-place award for its student-produced Grand Gouda against some of the top cheesemakers in the nation at the 2019 U.S. Championship Cheese Contest. The university also placed fifth with its Smoked Gouda.

The contest, held every other year in Green Bay, Wisconsin, is the nation’s largest and most prestigious technical cheese judging competition. This year, a record 2,555 entries from 35 states competed for awards in 116 classes of cheese and butter from March 5-7.

Much of the credit for Cal Poly’s success goes to students in the College of Agriculture, Food and Environmental Sciences, about 20 of whom work part time in the dairy plant and help manufacture cheeses and other products, such as chocolate milk and ice cream, under the supervision of Creamery Plant Manager Jennifer Pelayo.

“This award is validation of Cal Poly’s Learn by Doing philosophy,” Creamery Operations Manager Tom Johnson said. “In the end, it’s about providing valuable student experiences. Our students produce and care for everything we manufacture. The skills and knowledge they gain in the process with will serve them well, no matter what path they ultimately choose.”

This fall Cal Poly introduced three new cheeses, including the two winners, as part of a larger revisioning of the Cal Poly Creamery’s facility, equipment and products.

“The gouda is what I have worked with the most,” said Tina Truong, a food science senior. “It feels absolutely fulfilling to tell my friends that a cheese I helped make won an award and to hear in response that they can't wait to try it.”

Each wheel of Cal Poly’s Grand Gouda, which took the bronze medal, is handcrafted, coated with a traditional yellow rind, and aged on wooden boards. The cheese earned 98.75 points out of 100 and missed the gold medal by only 0.10 points. There were 27 cheeses entered in the category.

Cal Poly also placed fifth out of 27 entries in the Smoked Gouda category, earning 99.45 points out of 100. A full list of contest results is available here and here.

“We’re excited about our new products, and it’s an honor to have them recognized in such a prestigious competition,”Johnson said. “But this is just the beginning. We have many more products on the horizon.

“For more than 20 years, the Cal Poly Creamery produced the same variety of cheeses and dairy products. The success of the American artisan cheese industry changed the way we think about cheese. American cheesemakers are now making some of the most exciting cheeses in the world, and we think our students should be making some of these fantastic products too.”