‘A Day of Inspiration and Solidarity.’ Social Justice Teach In Dives Deep in its Fifth Year on Feb. 11 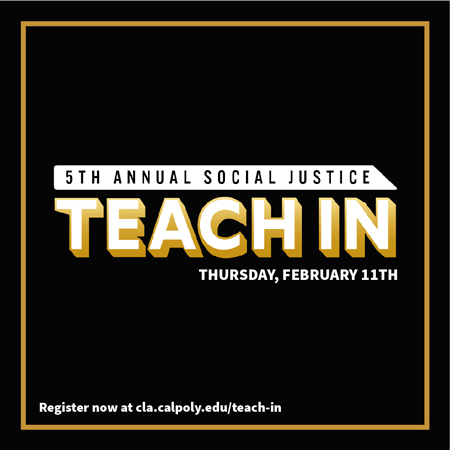 These are just a few of the topics the campus community, graduates and Central Coast neighbors can explore during Cal Poly’s Social Justice Teach In on Thursday, February 11.

Hosted by the College of Liberal Arts, the free, daylong event is made up of dozens of virtual talks and workshops centered around equity and social justice led by faculty, staff and students from across campus. This year’s virtual format builds on previous years of community outreach by welcoming more local residents and Cal Poly alumni to join the conversations.

The event’s founders say that the growing slate of presentations and audience members fulfills the original vision for the Teach In.

“It is a quintessential representation of the best of what the academy can do and what higher ed is called to do,” says Denise Isom, chair of the Ethnic Studies Department, Interim Vice President for Diversity and Inclusion, and Chief Diversity Officer. “To use scholarship, passion, research to have analytical, engaged discussions about this moment in the world, and then move that conversation to, ‘What then do we want to do about it?’”

Nearly 50 sessions make up this year’s slate of programming — the widest range of presentations in the event’s five-year history — representing the breadth of the university’s equity-focused scholarship. Everything from climate change to homelessness, social justice in engineering and diversity in construction industries are covered in Teach In events.

This year’s keynote session features Dr. Andrew Jolivétte, professor and chair of the Ethnic Studies Department at UC San Diego. His presentation, “Black Lives, Indigenous Lives: From Mattering to Thriving,” will examine the cultural and historic convergence of Black and Indigenous communities and explore how contemporary movements, including Black Lives Matter and Idle No More, ignite progress toward kinship, self-determination and joy.

This year’s event features four tracks for attendees who want to explore specific themes like racism, media and technology from different angles and get to know the depth of Cal Poly expertise in certain areas. One track focusing on public health inequities is particularly timely considering how the COVID-19 pandemic has affected the health of different communities.

“COVID has revealed a lot of inequities I think that we knew existed, but it's brought them to light in a new way,” says Jennifer Teramoto Pedrotti, associate dean for Diversity and Curriculum in the College of Liberal Arts and one of the event’s organizers. “There are quite a few faculty who study that particular topic at Cal Poly, and so to have their expertise brought to this stage, I think is really, really exciting.”

Cal Poly faculty who recently joined the university through its cluster hiring programs are slated to lead several sessions. These educators focus their teaching and research on diversity and inclusion in their field, and their impact on campus continues to grow.

“I think that that really speaks to some of the efforts that the university has been working toward as a whole to bring expertise to us,” says Teramoto Pedrotti of the cluster hire effort. “That expertise is now coming back to us in wonderful ways.”

Central Coast residents might take particular interest in several sessions that focus on the broader local community’s well-being, including “The City of SLO's Diversity Taskforce: Town/Gown Joint Diversity Efforts,” “Restrictions Apply: a short documentary on racism and the Happiest City in North America,” and “Introducing ‘Mi Gente, Nuestra Salud:’ A People’s Movement for Health in Santa Maria, CA.” Those sessions are presented in partnership with community organizations and local leaders.

A few presenters have also nimbly adapted their sessions to tackle current events that continue to shape the national conversation on social justice, including one session titled, “Georgia Elections, The Riot, and Race: An Exam of the Events of January 6, 2021,” presented by Isom and two other Cal Poly faculty members.

“We are in a moment of movements,” says Isom, “but it’s also part of what teach ins were always about — it was education to action.”

Organizers also developed a discussion guide and reflection questions to deepen the conversations attendees have after the sessions, especially as community members and groups of Cal Poly colleagues attend together. The tools are aimed at helping attendees and presenters reach beyond the formal instruction model to learn together and to think about how to make change in their own organizations.

“It represents the opportunity for community building and co-learning,” says Kari Mansager, one of the Teach In’s founders and Cal Poly’s Interim Director of Wellbeing. She feels the event encourages all students, faculty, staff and community to lead and learn alongside one another. “The event has an ability to address really important and hard topics around social justice and equity, but in a way that really capitalizes on our power on a college campus.”

The Teach In held its first sessions in 2017, and several of its founders see some parallels to this year. At that time, the nation had just experienced a divisive election and saw new activist movements organize across the country.

“I think part of what we were hoping to do with the Teach In wasn't just to inform and to bring people together to critically engage the moment,” Isom says, recalling the inaugural event. “It was also to be a time of gathering so that there would be healing, that people would not feel alone, that people would feel empowered to face the moment, and that they would see that as part of their academic, professional and personal growth.”

Since that first event, the Teach In has grown exponentially from a small series of discussions originally focused in one college to a hallmark of winter quarter and an ever-evolving display of the social justice expertise rooted in Cal Poly’s programs. Organizers are already optimistic about an even bigger event next year when more Mustangs are hopefully able to learn and work on campus.

But no matter the format, organizers hope to preserve a space where people can slow down, focus and reflect.

“The Teach In is a day where many people across campus just stop for a minute and focus with intentionality on these topics,” says Teramoto Pedrotti. “We feel like it's such a day of inspiration and solidarity.

“If we just stop for a second and take the time to learn about each other and learn about experiences that are different from our own, particularly at this time in our nation, it’s something that I'm really happy to see.”

Teach In sessions are free and open to all. Registration is required for each session. See a full schedule and register at cla.calpoly.edu/teach-in.

New Equity in Education Minor Helps Students Become ‘The Best Teacher I Can Be.’