From picnic areas to paddle-in camping sites, Cal Poly students are envisioning what amenities could be added over, under and on top of the Harford Pier in Avila Beach.

Nearly 250 Cal Poly architecture and architectural engineering first-year students are involved in a project this winter quarter to analyze, imagine and design new uses for the 1,320-foot-long pier, in part by adding 20 feet on each side of it.

Their work — including drawings and 30-foot models — will be available for the public to view from 9 a.m. to 5 p.m. Friday, Feb. 28 in three locations: the Berg Gallery and the Neel Resource Center, both located on the ground floor of Architecture and Environmental Design Building (No. 5); and the college’s lobby, in Room 212 of the same building. 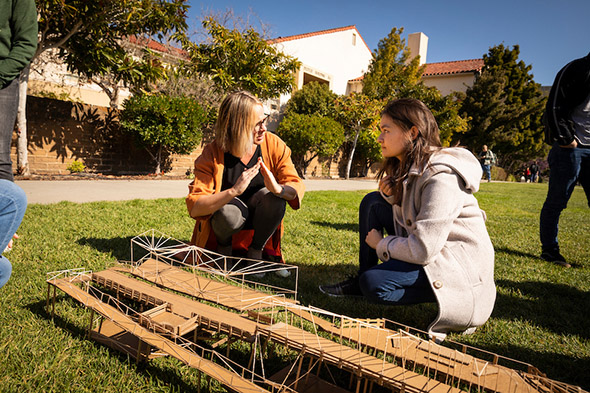 “We’re exploring the concept of adding more edge to the pier,” architecture faculty member Emily White said. “It’s a really great collaborative project. So many professions in the world work in teams, and these students are doing so from their first year at Cal Poly."

The Harford Pier was constructed in 1878 by its namesake, John Harford. It is one of the last piers the public can still drive on, according to the Port San Luis Harbor District, which owns and maintains the pier.

It’s possible that some of the students’ ideas could be included in future plans for the site. Port San Luis Harbor Manager Andrea Lueker said the district plans to complete a site plan for the Harford Pier, which will include short and long-term proposals for the next 20 years.

“The timing is pretty cool,” Lueker said. “I’m very interested in what the students come up with. I’m thinking there’s a way we can incorporate at least some of their input in our site planning process.”

In January, the students visited the pier, studying and measuring the entirety of it. Students from 11 studio classes are working in teams of three or four to design different sections of the pier. Twelve teams are collaborating on one pier, so on Feb. 28, visitors will see models of five piers showcasing numerous possibilities.

“The idea of integrating new ideas into an existing space and how to make it properly flow has been one of the main challenges,” architectural engineering student Tynan Castro said. “The more we go through it, the more we learn. The whole project is a learning process.”

Castro’s team designed a section to include a picnic area, a sea lion research station, and a site where kayakers could disembark, store their kayaks and sleep overnight.

Another student, Ari Delay, and her team created new, separated bicycle and pedestrian paths on the sides of their 130-foot section of existing pier to further separate cyclists and walkers from vehicle traffic.

“This is our third or fourth iteration,” she said while showing her team’s cardboard model. The models shown on Feb. 28 will be made with basswood. “Every time we redesign it, we learn more and we understand it better.”

Of the pier, she added: “I hope it becomes more welcoming and more interactive for the people who come to visit. It’s beautiful now, but this is about making the most of the surroundings and offering more opportunities for visitors.”

On a recent morning, dozens of students from the participating classes carried their cardboard models outside and lined them up in the architecture building and nearby on Dexter Lawn.

Architecture student Zoe Paris said the new amenities on display, such as a visitor center and larger gathering areas, could bring the community together.

“It’s definitely been difficult to come up with new designs and then make them realistic,” she said, looking at the models on the grass. “But seeing it all lined up together makes it worth it.”