While the wounds on 10-year-old Julian Reynoso’s hands are healing from a deadly drunken driving accident, a team of Cal Poly engineering students is working to restore the boy’s quality of life by creating a pair of prosthetic hands that will help him be a kid again.

“He couldn’t play with Legos, he couldn’t do all the simple things that I enjoyed in my childhood,” said Ryan Kissinger, co-lead of the Hands for Julian team. “So, the scope of the project is restoring that for him.”

In April of 2018, Julian was traveling with his family in their minivan through a Los Angeles intersection when a suspected drunken driver ran a red light and plowed into their vehicle, which was dragged 25 feet before catching fire. Bystanders frantically worked to pull Julian and his mother from the fiery wreckage, but they could not save Julian’s father, Juan, 34, sister Emma, 6, and brother Sebastian, 5 months.

While Julian survived the horrific accident, 85 percent of his body was burned, and he lost all or parts of nine fingers.

Last fall, Kissinger, a mechanical engineering student at Cal Poly, became aware of the boy’s needs through the Quality of Life Plus (QL+) club on campus, which pairs people who have physical challenges with students, who then work to improve the quality of life for the “challenger.” After accepting Julian’s challenge, Kissinger assembled a team of seven other students, from the mechanical, biomedical and electrical engineering programs. 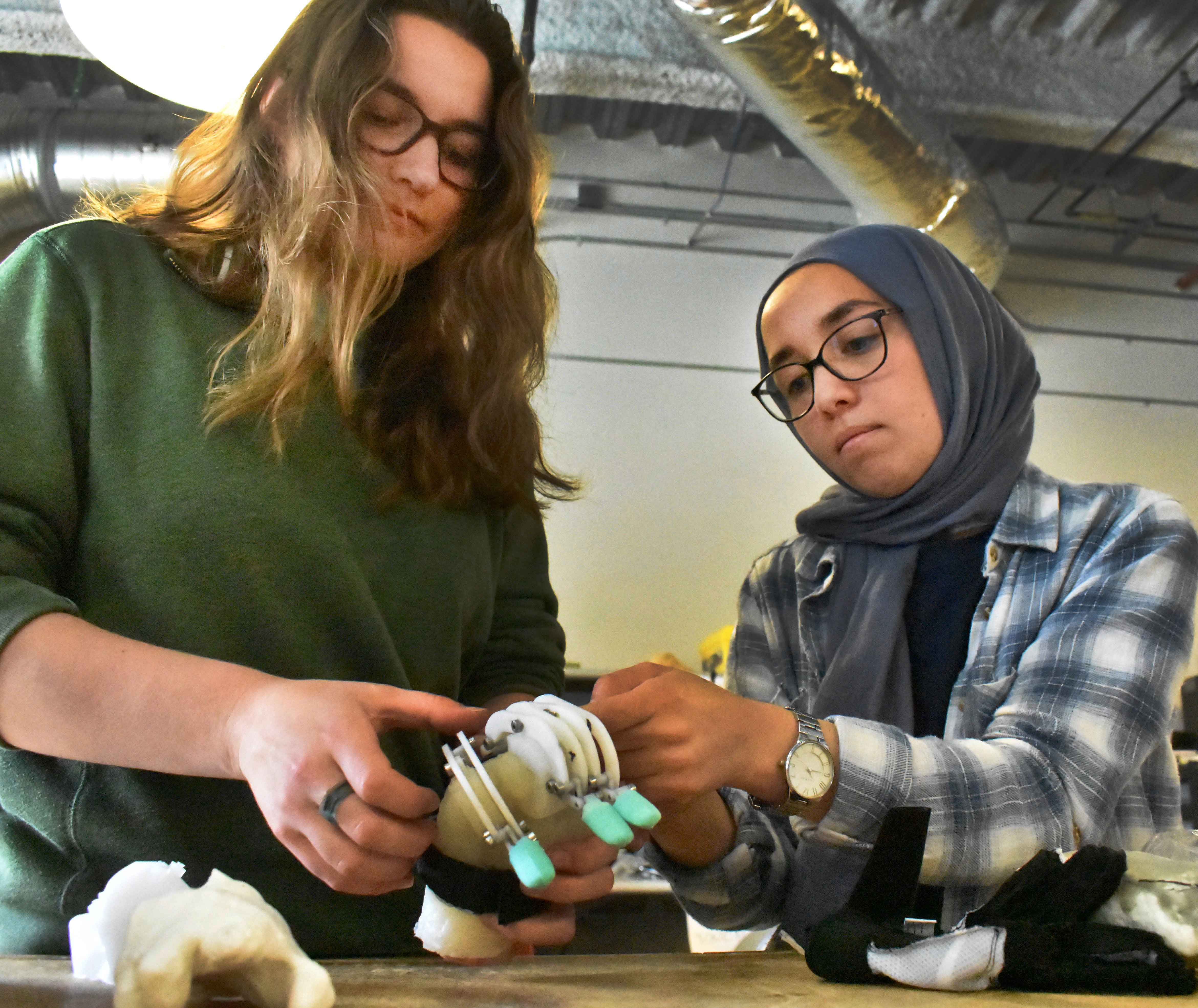 Austin Conrad, another mechanical engineering student, was one of 70 who applied, knowing the project would be a demanding challenge, particularly since the accident had occurred just a few months earlier.

“Not only is it a traumatic experience, but all of the trauma was very fresh, all the injuries were very new,” said Conrad, who is co-lead with Kissinger.

Soon after meeting Julian at the QL+ lab, the students learned that he would need two very different prosthetics, matching the level of disability for each hand. His right hand has enough digits to manually control the action of three fingers and a thumb on a mechanical hand, but his left hand was more severely injured.

“His left hand virtually does not have any finger left,” said Conrad, of Santa Rosa, California.

As a result, the team has been developing a bionic hand, with motorized fingers, which can be activated by the nub of his left hand.

To help fund the project, Kissinger started a GoFundMe campaign, which reached its $5,000 goal within 48 hours.

But after they had created molds of Julian’s hands, created computer models and began working on prototypes, they discovered a new challenge.

“The accident was so recent, the scar tissue has changed — the swelling has changed,” Conrad said. “And to top it all off, aside from the injuries changing because it’s so recent, he’s 10 — so he’s growing.”

Because the size and shape of Julian’s hands are transforming, the team has had to constantly modify the prosthetics they’re designing. At the same time, they have to complete the project by the end of the school year so they can present Julian his hands at Cal Poly on Saturday, June 8.

Some weeks, making the hands has been equivalent to a full-time job. But the students are gaining valuable experience as they create something that will make a difference in a child’s life.

“More than anything else, aside from delivering something that helps him, we also hope to show that there are people out there in the world that are willing to fight to try to make sure he can have a better future,” Conrad said.

Julian’s emotional scars will likely take even longer to heal, but Kissinger said he’s impressed with the boy’s attitude.

“He’s very charismatic,” Kissinger said. “Maybe it’s some testament to the human spirit about people’s ability to press on in spite of tragedy. When he was here, he was playing on his Nintendo Switch, and he was cracking jokes.”

Ask an Expert: How do COVID-19 vaccines actually work?

Beyond COVID: In the Research Lab, the Fight Against Other Deadly Diseases Continues

‘We Really Miss Having Those Experiences.’ Bio Professor’s Cartoons About Lab Life Bring Smiles During Pandemic

Ask an Expert: What’s So Special About the SpaceX Launch?