The honor, announced two hours before the start of the parade, recognizes the most outstanding use of animation, said Regina Chapuis, the Cal Poly SLO team president. It’s the first time that the schools earned the designation since the award names were changed in 1984.

“That’s all the moving parts on our float and also how that meshes with all the other parts,” she said. “How it meshes with the deco, how the concealments from design work with those animations to make them look smooth and fluid and put on a show for the parade.

“It’s really exciting and for me personally, working in electronics the past few years, to see that the animation team and how far they’ve come. I’m really proud of them and for the program as well. That’s really awesome to see that a bunch of us college students can go and make an animation performance that is on par and in this case better than a lot of the professional floats.”

The entry aims to exemplify the parade’s 2022 theme of “Dream. Believe. Achieve.” — a celebration of education’s ability to open doors, open minds and change lives. 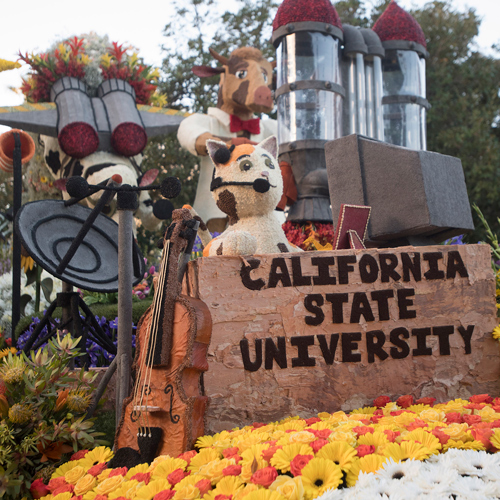 Stargrazers mixes the whimsy of the nursery rhyme with the hardworking atmosphere of a polytechnical university campus, with colleges dedicated to engineering and agriculture among other disciplines. As the float traveled the 5½-mile-long parade route, the audience learned the answer to how “the cow jumped over the moon.” It was by jet propulsion.

More than 80 students, equally split from each university, worked to finish the float during the COVID-19 pandemic and last year’s parade hiatus. While the Cal Poly campuses are multi-decade veterans of the Pasadena classic, this year’s entry overcame a number of administrative challenges and achieve some milestones: It is the first “two-year float”; and this is the first time that student float leaders who initiated the project had to hand over completion responsibilities to a new group, said Chapuis, whose duties as club president include promoting communication between the various departments, heading team events and facilitating the float move to Pomona.

Students on both campuses took the challenges in stride, however.

“It was exciting to be back building a float after a year of not having the parade,’ added Chapuis, a computer engineering senior who grew up in the Sacramento area and lives in Pismo Beach, California. “We had the unique challenge of continuing to work during the pandemic and trying to adjust to new rules and regulations. We also simply faced the challenge of not being able to participate in what is one of the most significant parts of our lives for a year.” 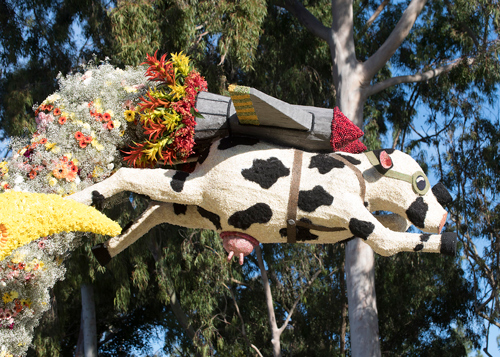 They re-imagined the children’s poem, creating a bigger-than-life rendering of if fleshed out with wit, wisdom and some intricate engineering.

“On the float, we follow the story of the cows’ journey to achieve their dream, but with a twist — jet packs,” she said. “As our float turns the corner, the first thing the audience sees are the cows fabricating and testing jet pack designs. As the float continues forward, we see that the cows are aided by other characters from the nursery rhyme.

“As the float moves away, the cows finally achieve their dream: One courageous cow is flying over the moon using one of the jet packs they all worked so hard to construct. They achieved their goal by dreaming big, believing in their ability and working hard.”

The four students who rode unseen below the float decorations included three from the Cal Poly San Luis Obispo campus. They included: Jeremy Sim, an electrical engineering graduate student, assisted the driver, Cal Poly Pomona’s Sam Linkchorst; Dave Lanfranconi, a mechanical engineering senior from Cupertino, California, who plans to graduate in June, was the drive engine operator, overseeing the engine that propels the float along the parade route; and Annie Doody, a marine sciences junior and theater minor, who ran all of the float animations.

“Cal Poly universities Rose Float is an example of Learn by Doing in action and an inspiration to all who see it,” said Cal Poly President Jeffrey D. Armstrong, who was in Pasadena to watch the parade. “Students from all six of our colleges come together to brainstorm ideas, then tackle engineering challenges to make the float come to life, all topped by an artist’s palette of colorful blooms.”

“’Stargrazers’ is unique among all the floats that our students and their counterparts at Cal Poly Pomona have produced over the decades in that it combines the efforts of two separate teams of individuals at each campus over the past two years. They persevered through the pandemic, overcoming the frustration from last year’s parade cancellation to present this stellar floral bouquet for the world.” 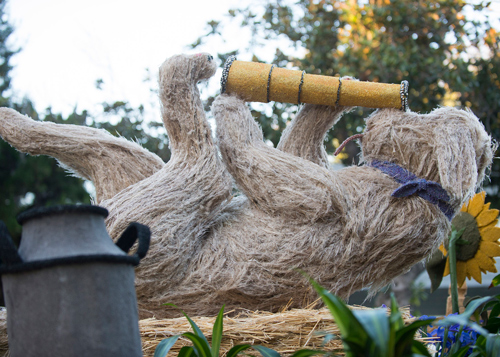 It was one of only six self-built entries in this year’s extravaganza that included 41 other floats, including one for the Royal Court and each of the two Rose Bowl teams, 20 marching bands, 18 equestrian units and actor LeVar Burton, the 2022 grand marshal.

Rose Parade® officials estimate that 700,000 people saw the parade in person, while 37 million Americans and an international audience of 28 million tuned in to watch it on TV.

The 18- by 55-foot entry, with a flying cow that rose to 23 feet, used animation to showcase the builders Learn by Doing experience: The high-flying cow rocked back and forth; the cow at the front of the float lifted its arm up and down as it welded; and the third pressed a button to test fly a jetpack. The test jetpack rotated, rose up and down, and had clear tubes with dried deco material flowing through it. Carbon dioxide burst out of each jet pack to simulate propulsion. In addition, the dog rocked back and forth on its back consumed by laughter.

Awards were announced by 2022 Tournament of Roses President Robert Miller about 6 a.m., two hours before the start of the parade that traveled north on Orange Grove Boulevard and then east onto Colorado Boulevard.

“Our team works so hard,” said Chapuis, who attended her first Rose Float club meeting as a freshman (then never missed another) and also held several leadership roles before becoming club president. “We really put our best efforts into everything we do, making sure we’re representing the theme, the message we want to send, at the same time making sure everything is completely safe and up to standards. The Tournament doesn’t cut us any slack just because we're students.”

“Stargrazers” was decorated with thousands of cut flowers and plant materials from across the nation, reflecting Cal Poly Rose Float’s new relationship with Certified American Grown, a unified and diverse community of American cut flower and foliage farmers. It ended a 10-year partnership with the California Cut Flower Commission that disbanded last December after 30 years as the Golden State’s major cut flower trade association.

During the recent Decorations Week in Pasadena, the float was adorned with nearly 20,000 colorful blooms — chrysanthemums, Gerbera daisies, pink roses and carnations.

The color scheme spans the whole rainbow: green rolling pastures (Crane Feather Queen and Russian kales, prairie dropseed, various foliage and mosses); multi-colored cows (decorated with a variety of seeds, Chinese black moss and rice powder); to a moonscape of yellow and white chrysanthemums; to a bed of clouds at the rear of the float with a sunset color palette of roses, irises and carnations, along with cotton, cauliflower and mushrooms.

The silvery-gray colored milk cans and jetpacks were flocked in a mixture of onion and lettuce seeds and rice powder. 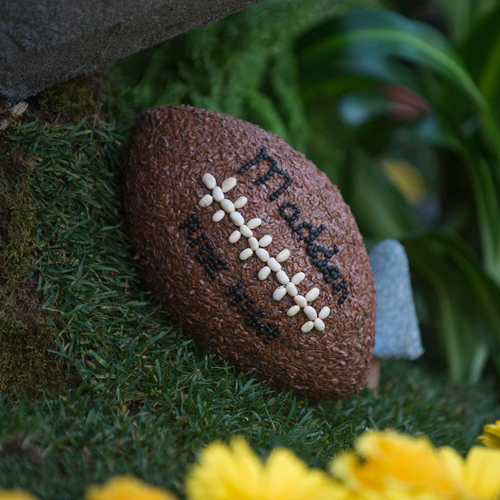 The schools enjoy a rich history in the Tournament of Roses® Rose Parade. Among this year’s participants, the Cal Poly universities’ 73rd appearance ranks fifth highest behind South Pasadena —  the most venerable with 127 — followed by Southern California cities of Alhambra (93), Sierra Madre (90) and Burbank and (89).

Cal Poly Rose Float team takes pride in its Pasadena connection. In the fall of 1948, students from San Luis Obispo and Pomona first came together, across 240 miles, to produce a float for the 1949 parade. Since then, the two schools’ entries have earned 61 total awards over the years.

In addition to the Rose Parade® trophies, the program has earned countless accolades for its innovations such as include computer-controlled animation, hydraulic systems and cleaner emissions with propane later incorporated by professional float builders.

“This year we are attempting a mechanism that will have flowing deco inside of clear tubes,” Chapuis said before the parade. “Usually every inch is covered in natural material, but we approached the Tournament of Roses with a design variance to keep the tubes clear, and our design was approved.

“One of the test jet packs has these clear tubes with an air blower that sort of flows like a tornado in the tube. We’re going to put in dried deco, like dried flower petals, and have it flutter around. If successful, this will be the first instance of flowing decorations.”

Cal Poly’s Learn by Doing ethos is exemplified in all facets of the float program, as students from throughout all six of the university’s colleges get hands-on experience welding, metal shaping, machining, foam carving, woodworking, painting and flower harvesting — ultimately competing against professional float builders with corporate sponsorships.